Bottled Up by Andrew Grey 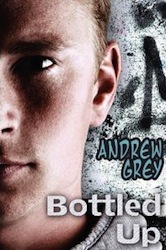 Bottled Up by Andrew Grey takes place in the same neighborhood as The Best Revenge, which I read earlier this year. It was wonderful to meet up with Tyler, Mark and Steve from the previous book as well as police officer Sam Davis who plays more of a central role in this book.

The main character here is Sean Bielecki, who recently opened up a wine store on the same street as Tyler’s antique store. As the book opens, Sean breaks up a fight behind his store between a large man who is trying to take advantage of a teenager. It turns out the teenager, Bobby, has been living on the street for weeks after having been through several foster homes. Sean helps Bobby by giving him a place to sleep for the night and decides in pretty short order that he wants to adopt the teen so that Bobby won’t be stuck on the streets anymore.

As all of this happens, Sean is breaking up with his smarmy boyfriend Ted and that gives officer Sam a chance to move in after months of wanting to ask Sean out. Sean has baggage from his past, which factors into why he initially wants to help Bobby, but the baggage also makes it hard for him to get close with Sam too. I don’t want to say too much else about the plot because the twists and turns in the plot are delightful. Grey packs a lot of punch in these 216 pages as a father/son relationship starts, a boyfriend relationship starts and a whole lot of extra drama gets stirred up with Sean’s icky ex as well as the man who tried to hurt Bobby.

As much as I enjoyed The Best Revenge, this book topped it with a gripping and suspense-filled plot. In fact the plot might have been too good as there were times I wanted to rush past some of the bedroom scenes to get back to the action. This is not a bad thing it all, it’s a testament to how well Grey crafted this story–it’s a true page turner.

Up  next: Uncorked by Andrew Grey. This one jumps forward a few years and focuses on a college-aged Bobby.