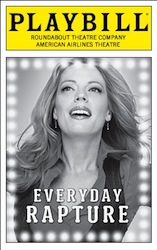 We missed out on Sherie Rene Scott’s Everyday Rapture when it played the Second Stage Theatre last year. We’d wanted to see it because we love Sherie having seen her in shows like The Last Five Years, Aida and Dirty Rotten Scoundrels. This is one more amazing performance for her resume and this time it comes in a show that she’s also co-written with Dick Scanlan (winner of a Tony for the book of Thoroughly Modern Millie).

Everyday Rapture show is semi-autobiographical and chronicles Sherie’s struggle with her half-Mennonite upbringing and her desire to be a Broadway star. Mennonite’s believe in being selfless, and Sherie’s efforts to call attention to herself through song and performance is frowned upon.

Sherie’s tells selected stories from her past. While growing up in Kansas, her parents sampled several churches as the explored religions outside their own. Among those churches was the Westboro Baptist Church with Fred Phelps at the helm. This leads into one of the most touching stories as she discusses seeing protestors from the church at the funeral of one of her cousins. While it’s not said outright in the show, it’s clear that her cousin, Jerome, was gay and died of AIDS. Jerome is the person in her life who encouraged her to become the performer she was destined to be and introduced her to the music of Judy Garland. Among the other stories she covers is her trip to New York, an interaction with a fan she discovered on YouTube that lip synced to her “Strongest Suit” number from Aida and how Mr. Rogers impacted her life by letting her know it was okay to be who she was.

The songs in the show pulls from a vast array of popular music from artists as diverse as U2, Mr. Rogers, Roberta Flack, The Supremes, Tom Waits, Elton John, Judy Garland, The Band and others. The music perfectly interweaves the stories and connects to the overall theme that you have to live inside the song that’s in you.

Sherie is up for two Tony Awards tonight — one for her performance and one for the writing. I’d love to see her win both because this is a wonderful and inspirational work. This is a limited engagement that ends July 11 and you are encouraged to check it out if you can. Here’s a small video sneak preview from the Second Stage run.