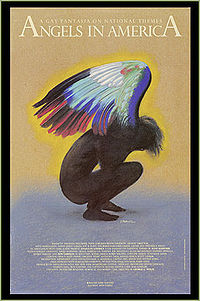 I first saw Tony Kushner’s Angels in America: A Gay Fantasia on National Themes at the American Conservatory Theater in San Francisco in the mid-90s. By that time, the two part show had completed its Broadway run, won Tony Awards for Best Play in ’93 and ’94 and the first part won the 1993 Pulitzer Prize for Drama among many other awards. I was blown away by the epic story that deals with the beginning of the AIDS crisis on a national level as well as what it meant to be gay in the 80s and early 90s.

I attended the show all in one day too with Millennium Approaches as the matinee performance and Perestroika in the evening. Add to that driving the four hours to San Francisco before the matinee and it made for a long day of sitting. Normally that bothers me, but for this it didn’t because the production was captivating. To this day it remains one of the most significant and powerful theatrical experiences I’ve had.

Nearly a decade after that, I watched the TV version on HBO, which Kushner wrote for the screen. It was very good, but didn’t compare to the power of the stage production.

This year, New York’s Signature Theatre Company is celebrating its 20th Anniversary with a season of Tony Kushner. It kicks off in September with the first New York productions of Angels in America since the Broadway closing in 1994. Tickets went on sale yesterday (a process which completely overwhelmed the Signature’s technical infrastructure) and I picked up tickets to both parts.

I’m excited to share the theatrical experience with Will. We were not yet going out when I saw it in SF and he’s never seen it on stage; only on HBO. We’re not seeing it in an ideal fashion. The tickets for the “all-in-one” days were sold out by the time I got through to the box office. In fact, we’re going to see them backwards with Perestroika in mid-September and Millennium Approaches in December. At least we know the story, so it’s not like there’ll be spoilers.

There are some notable cast members in the production too: Billy Porter as Belize, Zachary Quinto (making his New York theatrical debut) as Louis, Frank Wood as Roy M. Cohn, Robin Weigert as The Angel, and Christian Borle as Prior Walter. It’s also going to be an intimate production as the Signature space only seats a couple hundred people. It’s bound to be two memorable nights of theatre.