POPart: The Musical at NYMF 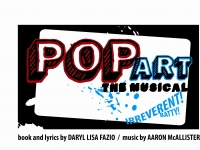 Early in Act I of POPart: The Musical, Kitty, the show’s heroine, arrives at the Ghetto Art School and receives a book detailing the school’s slang terms. In it she finds the word “interesting” defined as what people call something they don’t really like.

I wouldn’t say it was bad, but it also wasn’t good. It lived in the gray zone of the mediocre. In fact, Will and I left at intermission because we weren’t engaged enough to see how it ended in Act II. This is probably only the third or fourth time that I’ve ever left a show at intermission because I usually stick it out and see if even a bad show can get better because there’s usually some hook that I think can pay off. Here I was okay being done.

“With her new friends–an ultra-cool street artist and a kind-hearted boy-genius–Kitty forges through the school’s cutthroat and preposterous melée, yearning to be a true artist,” said the show’s New York Musical Theatre Festival’s (NYMF) description. Sounded like it could be pretty good. By the end of Act I, however, all we had was an introduction to a bunch of teachers who were unappealing caricatures and to a bunch of students you were kind of forgettable.The show’s main student trio were on the verge of being engaging, but we didn’t learn enough about them. Kitty had serious confidence issues with her art, Toni-O was a ball of buoyant energy and Edward was a  bit odd and liked to eat paint.

Next week I’m sure our NYMF fortunes will take a turn for the better as we see Anthony Rapp’s Without You.