Confessions of a Prairie Bitch by Alison Arngrim 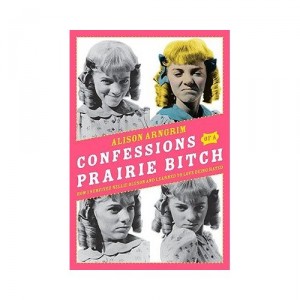 It’s been an unnaturally long time between book review posts. The last one was back on October 9 with The Bucolic Plague: How Two Manhattanites Became Gentlemen Farmers: An Unconventional Memoir by Josh Kilmer-Purcell. It’s not that I haven’t been reading the past few weeks, it’s just been going slowly as I’ve been working on various writing projects.

I stayed in the non-fiction genre to read one of Will’s recommendations: Confessions of a Prairie Bitch: How I Survived Nellie Oleson and Learned to Love Being Hated by Alison Arngrim. The book is more than just a remembrance of Arngrim’s time on Little House on the Prairie as it covers her parents before she was born and runs all the way up into early 2010 when she attended Melissa Gilbert’s wedding to Bruce Boxleitner.

Arngrim is the daughter of a talent agent father and a cartoon voice over artist mother. She’s also got an older brother, Stefan, who is probably best known for being one of the co-stars in Land of the Giants. The life this family led was kooky to say the least as they moved in and out of homes, constantly trying to maintain a good address. One of the more difficult stories Arngrim relates is how she was sexually abused by her brother. Years later she related that story on Larry King’s show as part of her work with the child advocacy group PROTECT and helped to re-write incest laws across the country.

Of course, Arngrim is best known for her years on <em>Little House</em> and the book is packed with wonderful, and often funny, stories of the audition process, of the crazy shooting schedules, the one time her and her on screen mom (Katherine MacGregor) did a public appearance in costume and how badly that ended. My favorite stories detailed the friendship between Arngrim and Melissa Gilbert. They played rivals on screen, but off-screen–basically from the first day of shooting–these two were fast friends. It was surprising, and sad, to read how unfriendly Melissa Sue Anderson was.

Arngrim is a great storyteller, infusing the stories with warmth and humor. She pays wonderful tribute to both Michael Landon and her on-screen husband Steve Tracy. Even the darkest stories in the book don’t have a “pity me” vibe. She puts those stories out there matter-of-factly and you can tell that she’s basically made peace with them over time.

She does a one-woman show version of the book and I would love to see that sometime if it ever plays near me. The  book also made me want to watch some Little House, which I haven’t watched in years (isn’t it on the Hallmark Channel these days?).

Up next: Mary Ann in Autumn: A Tales of the City Novel by Armistead Maupin