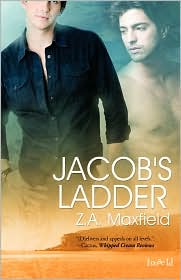 Jacob’s Ladder is the third book Z.A. Maxfield has set in the town of Santo Ignacio (aka St. Nacho’s), California. I’ve loved the other two–St. Nacho’s and Physical Therapy–but this one is now my favorite of the series.

Maxfield created a magic place with Santo Ignacio. It’s a place where lost, damage souls seem to gravitate and find peace at. At the same time its native population are a rare people, completely accepting, loving, caring. It’s an idealized town and a place that’s great to visit in these novels.

In Jacob’s Ladder we meet Jacob Livingston, a L.A. pastry chef, Israeli army veteran and domestic violence victim. Coming home sick from work, he discovers his boyfriend cheating on him. They get into a brawl that leaves Jacob near death. After getting patched up he leaves town on the bus, headed to his brother’s place. The bus driver kicks him off the bus in St. Nacho’s because the people on the bus are worried he has swine flu or worse.

St. Nacho’s is exactly what Jacob, or Yasha, needs. He’s embraced by the town, figures out how to cope with his demons and find a better life for himself. Even in St. Nacho’s though not everything is always perfect. Jacob meets a couple of rescue workers–JT, a sweet but deeply closeted EMT, and Cam, a out and proud fireman.Both men are into Jacob but Jacob only his eyes for JT even though he knows that might end in heartbreak. As the story progresses we also meet Dan, Jacob’s brother, who has a few life changes going on as well.

Characters from the first two books are also hinted at. Cooper still plays violin at Nacho’s Bar (we don’t see his boyfriend Shawn directly, but there is a reference made so you know he’s around). Ken is doing well at working in real estate (his boyfriend Jordan also doesn’t make a direct appearance but his mentioned briefly). Mary Catherine is making delicious pies. Ken and Mary Catherine get the largest supporting roles in Jacob’s story.

As usual, Maxfield mixes well-defined characters with a great story. There are twist and turns here that I didn’t see coming and they were superbly executed. As with the other two books, I wished this story had kept going because it was so enjoyable. The last half was particularly emotional as I went from warm and fuzzy to laughing out loud a couple times to being near tears.

I say it every time I finish one of these books–I hope Maxfield goes back to St. Nacho’s. I know if she’s writes it, I’ll read it.