A Tabloid Love by T.A. Chase 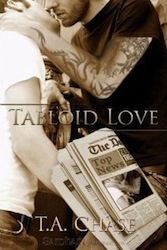 This is the second book I’ve read of the three Will got me for Christmas (the first was Jacob’s Ladder by Z.A. Maxfield). He picked so good with the gifts because this book was oh so good.

A Tabloid Love is made up of two stories: Tabloid Star, a novella, and With This Ring, a short story. The stories center on Josh, a hard working guy who doesn’t have much time for anything but the three jobs he works in L.A. area, and Ryan, star of the latest sci-fi/action flick that will make or break his career.

In Tabloid Star, Josh feels an immediate attraction to Ryan when the actor ends up in the  bar where Josh works. What Josh doesn’t know right off is that the feeling is mutual. Unfortunately their night of bliss is ruined as scandalous picture show up the next day in The Hollywood Enterprise.

Of course, these photos could ruin Ryan’s career before it takes off. For Josh, the reporters swirling around him are a nuisance and he’s worried about the effect it will have on his job, not to mention his family. Surprisingly the two form an alliance to figure out who is behind the photographer following Ryan and fix the problems that’s caused. As they work together and learn more about each other’s lives they fall more in love too.

At the start of With This Ring, the story jumps forward as Josh and Ryan, along with their family and friends, gather on New Year’s Eve in Vermont as the two get married. This story bounces back and forth between the wedding and day and months previous where Ryan proposed, Josh met Ryan’s family and assorted other flashbacks.

Chase created such rich, strong characters with Josh and Ryan I was drawn into this book within the first few pages and had  a difficult time ever putting it down. The conflicts and setbacks in the book only bring Josh and Ryan closer together and it was great watching their bond grow stronger as it culminated in their wedding. I was with lots of warm and fuzzy feelings as I finished and that’s always a good way to end a book. If there is another story with Josh and Ryan I will definitely pick it up.

Up Next: I’m moving on now to the third book Will got me for Christmas: Squirrel Seeks Chipmunk by David Sedaris