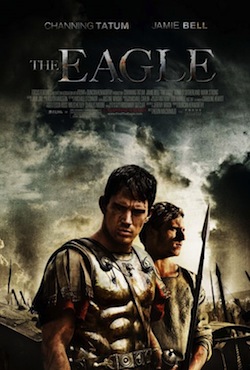 I’m happy to report that our first movie of 2011 was a good one. The Eagle wasn’t exactly what I expected in terms of plot, but it exceeded expectations for how good I thought the movie was going to be.

I admit the initial attraction to this film revolved around Channing Tatum and Jamie Bell and seeing them in the scant attire that a sword-and-sandel pic usually involves.  Sadly they were clothed far more than the warriors in 300, but that’s okay because the plot carried things nicely.

Tatum plays a Roman, the son of the man who lost 5,000 troops in a battle in northern Britain. Besides the men, he also lost a golden eagle, which carried a lot of symbolism. Tatum, as he takes his first command, seeks to restore his family’s honor. However, he’s injured and discharged just days after taking his post. During his recovery, he saves the life of a slave (played by Bell). These two end up trekking into the territory where the eagle was lost in an effort to recovery it.

Everyone thinks it’s a crazy journey. Not only is a Roman going into hostile territory, he’s doing it with someone who is the son of one of the tribe leaders who was killed by Romans. It’s not the ideal match, but promises were made, loyalty given and so the journey was a go.

There’s a lot of scenery in the film as the two ride and ride and ride some more. The slave does most of the talking in the Northern territory and these two form a friendship that’s put to the test when they come into contact with the tribe that has the eagle. Is the Britain going to betray the Roman? Will the slave become the master? The tension stayed ratcheted up through to the end. I knew how I wanted it to go, but I wasn’t sure which way the script would take it.

Tatum and Bell were both good in their roles. They both had baggage to carry from the years of war and the loss of their fathers and they played that well. The sword play was fun and honestly I wished there was a bit more of it even though I’m not sure where it would’ve been placed. There’s also nice bit parts from Donald Sutherland and Denis O’Hare that were pleasant.

Overall, The Eagle was a nice afternoon diversion that I didn’t mind paying the admission price to see.

Now, can someone get Tatum and Bell into a dance movie? Tatum hasn’t done one since Step Up 2 and Bell hasn’t since Billy Elliot. I think it would be cool for them to team up for that!