With or Without You by Brian Farrey 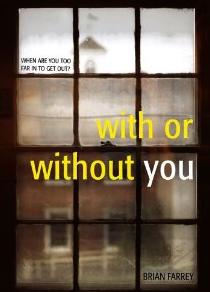 Full disclosure upfront: I am friends with the author of With or Without You.

I stumbled upon Brian’s blog, which, at the time, was chronicling his life as an MFA candidate, a few years ago. It was an interesting blog and I kept coming back. One of the things he wrote about was his thesis project, which was the earliest form of this novel. Over the years we’ve become friends and I was excited when he announced to the world that what was his thesis was going to be published. The book was officially released today but for some reason Amazon had mine in my mailbox on Saturday.

I’ve already devoured it. It was an incredible read–a great mix of powerful, funny, disturbing and inspiring.

The book centers on Evan, an 18-year-old who graduates high school in the opening chapters. He and his best friend, Davis, have been bullied relentlessly during their school years. Evan’s parents mostly ignore him and he’s got a sister who he gets along well with. He’s also got a secret boyfriend who happens to be four years older. He’s a painter. More than anything he’s trying to figure out who he is and where he fits in the grand scheme of things.

For Evan, the summer between high school and college is epic. The breadth of things Farrey covers is long and he juggles all the pieces superbly. Given how many things today’s teens have to deal with, it’s not all that surprising really to find so much going on here. Some of the goings on are pretty basic–where to go to college or how do I reveal my boyfriend to my parents. There is a lot of deep stuff too–what does it mean to be gay, how does gay history play into my life, how do I integrate the secret boyfriend into the rest of my life. There’s some very dark and troubling things that happen, which I’m not going into because I refuse to spoil the ride for others. I will say that there were times it was uncomfortable to read while at the same time I was completely riveted and couldn’t put the book down. I had to know how Evan was going to handle what was being thrown at him.

Among the elements I loved in the book is how Evan’s art is described. Ever few chapters, there’s a description of one of his works and why he painted it. It’s an interesting look at his artistic side, while filling in some crucial background. It’s rare to see flashback material not yank you out of the “present” story in progress. Here it’s presented in a way that makes it part of the natural story flow.

In terms of YA that I’ve read, With or Without You feels like it pushes boundaries with it’s vivid descriptions of  bullying as well as the things that go down when Evan and Davis get involved with a club called, The Chasers. On the other hand, it’s the unfortuante reality of today that nothing in the story seems as though it couldn’t happen to a teen. Hopefully the teens that read it can avoid some of the pitfalls.

Congratulations, Brian on a great debut novel. I look forward to your next book.

You can keep up with Brain at brianfarreybooks.com