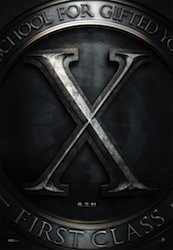 After a disappointing X-Men: The Last Stand in 2006 its taken four years for the franchise to put itself back together again (I don’t count X-Men Origins: Wolverine as truly part of the franchise because of its limited scope). X-Men: First Class doesn’t live up to the high standard set by X2, but it is still a quite satisfying film and hopefully a solid reboot for the mutants.

The film starts during World War II. We find the man who will become Magneto in a concentration camp while the future Professor X discovers Mystique in his kitchen looking for food. Jump forward a couple decades and Erik, Charles and Raven are working with the CIA to stop super baddie mutant (and the man who essentially made Erik into Magento) Sebastian Shaw. Shaw wants to start World War III by escalating the Cuban Missile Crisis. The idea is that mutants will rise in the place of humans.

Watching the origins of Professor X, Magneto, Mystique was cool, and heartbreaking. These three started as friends and, as we all know, ended up on opposite sides of the battle. We also get to see how Hank McCoy fully became Beast (this was a much more satisfying Beast than the one Kelsey Grammar played in Last Stand). Also seen were mutants who were in Professor X’s first training program: Banshee, Darwin, Havok.

James McAvoy and Michael Fassbender did a great job of stepping into the younger versions of Patrick Stewart and Ian McKellen. Nicholas Hoult was a welcome find in the role of Hank McCoy/Beast. The chemistry between him and Jennifer Lawrence’s Mystique was excellent.

The movie certainly continues the allegory of the mutants representing any repressed race. Professor X, even in his mid-20s, wanted to assimilate and help society. Magneto was more content to force things to be his way.

If the X-Men series continues, I’d like to see more stories told in these early days of the Professor X’s school. I think these would be the best sort of origin stories. Movies like the Wolverine one, while entertaining, end up with a too constrained focus. Let’s keep seeing movies with more of the full X-men team.