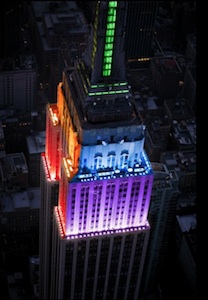 Last night was historic for New York State. Before midnight governor Andrew Cuomo signed legislation allowing same-sex couples to get married. It’s been a long road to get here. Similar legislation failed in the state Senate in 2007 and 2009 and nearly failed again this week too.

As the debate, rallies and rethoric raged on in Albany this week, Republican senator Roy McDonald, who represents district 43 near Albany, said this during a press conference: “You get to the point where you evolve in your life where everything isn’t black and white, good and bad, and you try to do the right thing,” McDonald, 64, told reporters. You might not like that. You might be very cynical about that. Well, fuck it, I don’t care what you think. I’m trying to do the right thing. I’m tired of Republican-Democrat politics. They can take the job and shove it. I come from a blue-collar background. I’m trying to do the right thing, and that’s where I’m going with this.”

If only more of our leaders took stands like this. It’s these types of people who should be governing.

But, back to the main point…

New York has become the largest state in the union allowing marriage equality. According to census data, more than 42,000 same-sex couples live in the state. Further, with a population of over 19 million, more people live here than in the six other states (Massachusetts, Iowa, Vermont, Connecticut, New Hampshire and D.C.) same-sex marriage is allowed. The nation will be watching what happens here with how this affects the economy and society. There’s a great article from Reuters about this. You can check it out on Yahoo News.

It’s particularly gratifying to know that Will and I can now become legal after 16 years together. As far as I’m concerned, we’ve been married since 1997. I know that in my heart. Now, New York will let us make that legal and bind us together in some important legal ways, legalities that become more important as we get older. It’s also a good feeling to know that we’re considered equal in the state we live in.

The fight for equality isn’t over. There are more than 40 states that still need to recognize the equality of LGBT Americans. Not to mention that there needs to be equality on a Federal level. But, for this NYC Pride Weekend, we can certainly take a moment to celebrate a huge step in the right direction.