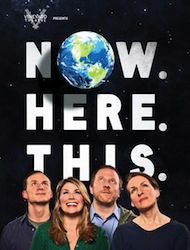 The show is based in the idea put forth by a monk that if people were in the present, rather than constantly distracted, the more they would truly connect with their lives.

The time is now. We are here. Let’s do this.

Now. Here. This. has grown up a lot in the past nine months. What was mostly a series of skits with a common theme, now has a stronger through line and that makes the stories and songs all the more powerful. In an effort to live Now. Here. This., the four go to the natural history museum to learn things. What the audience gets is an array of stories about trying to let go of worrying about others think about you, connecting with family, being present in the moment, and what can be lost if you’re not in the moment.

As with [title of show], there are moments of profound laughter, drama, sadness and inspiration. The collaborators–Hunter Bell, Michael Barresse, Susan Blackwell, Heidi Blickenstaff, Jeff Bowen and Larry Pressgrove–know how to craft a story that can hit home. Among my favorite pieces are “Dazzle Camouflage,” which looks at the lengths people will go to in an effort to hide their real selves; “That Makes Me Hot,” which gets to the core of embarrassment and “Golden Palace,” which delves into the creative process.

I have two favorite pieces. Heidi and Hunter talked about their relationships with grandmothers they lost. There were no songs, but some powerful storytelling. As with [title of show]‘s “Way Back to Then,” it’s Heidi who gets the most powerful song with “This Time” which stopped the show for a moment as the audience showed its appreciation.

And here, as a parting moment, is Will posing with the big poster outside the Vineyard, contemplating the meaning of Now. Here. This. 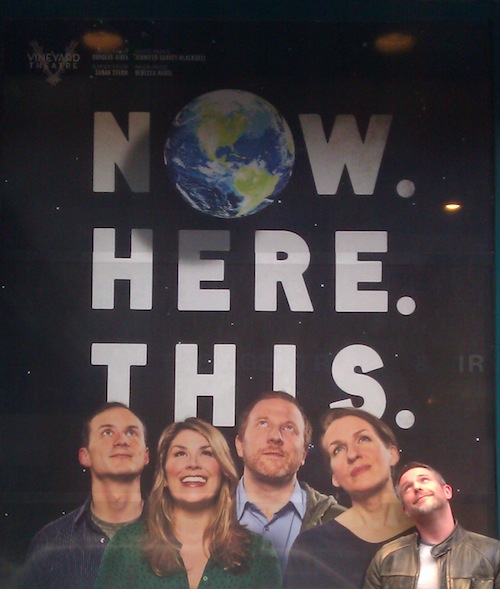