I’ve never reviewed such wildly different books in the same post, but here we go… 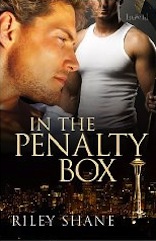 First up is In the Penalty Box by Riley Shane. Will knows I’m always up for a book featuring hockey players and he picked this one up for me from the Kindle store. This story features writer Landon Quinn, who is moving back to Seattle after four years away. Among the reasons he left town in the first place was a disastrous encounter with Seattle Marauders star defenseman Gregory Samson–while these two were in bed, Gregory called Landon by another name. Oops.

This was a very enjoyable story, not only was there they will they/won’t they story for Landon and Gregory there were some great side stories as well. It looks at a time when the NHL has an openly gay player, which was awesome. It takes a deep look at what can keep someone in the closet, even though they desperately want to come out (this part of the story was quite moving and Shane did a great job with the revelations around this).

The core of the story sits between Landon and Gregory and these two characters are great. Shane uncovers how both men have grown in four years, but how both are still hurt. You root for them from the beginning and the tension around where their relationship could end up kept me turning the pages. There is another book in the Seattle Marauders series and I will pick that up soon to see what else this team gets up to. 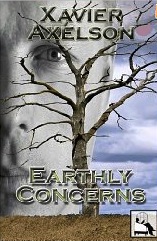 Next up is a title I don’t think I would’ve picked up on my own, but it was recommended to me by its publisher and I’m glad it was because it was enjoyable and proves I should try to branch out my reading a bit more. Earthly Concerns by Xavier Axelson feels like something between the TV show Supernatural and a Stephen King book.

This book opens with Anson getting a frantic call from his ex. Barrett’s daughter is “gone.” Even though the two haven’t been together for some time, Anson agrees to help. In this case, what Barrett needs is Anson’s psychic abilities. Anson, like his aunt, has the ability to see into other dimensions and he quickly figures out that something sinister has Hilary and that it’s not going to be easy to get her back.

Earthly Concerns had a good bit of scare and tensions. Axelson does a fine job at setting the characters, and the tension  between them as exes, while also creating the demonic side of the story that was easy to follow yet creepy at the same time. The story was also an interesting commentary on the choices we make and the lengths that people will go to help out another person.

My only wish for this book is that it went just a little further after the resolution of the main plot. I’d like to know a bit more of what went down in the aftermath. Usually I’m okay with letting my imagination fill in the blanks of what happens, but in this case I wanted to be told more than I got.

I do think I’ll sample a few more books like this though because it was quite enjoyable.