So You Think You Can Dance unleashed the best episode of the season last night with the top eight performing two routines–one solo and one with an all-star–in an effort to show why they belonged in the top eight. The result was some of the most incredible dancing SYTYCD has ever had. Besides the great dancing, Modern Family star Jesse Tyler Ferguson was back as a guest judge.

The show got off to a great start with new-to-SYTYCD choreographer Peter Chu. It was a sharp looking number that let everyone show off some intensity.

Chehon with all-star Anya Argentine Tango choreographed by Miriam Larici & Leonardo Barrionuevo
What a smoldering and intricate performance. The leg work and lifts here were amazing and Chehon, with his ballet background, nailed them. This was his best dance so far and one of the best Argentine Tangos I’ve ever seen. 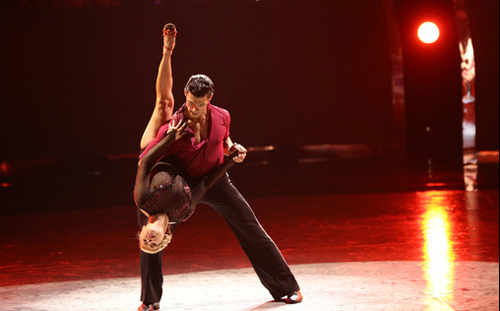 Cole with all-star Allison Contemporary choreographed by Sonya Tayeh
Wonderfully quirky and intense. Everything you’d want from a Sonya routine. For dancers, you don’t get better than Allison… and Cole matched her every step of the way. Their partner work and characterizations were breathtaking. Some of the ways she was hanging off him seemed so impossible, yet it worked perfectly. 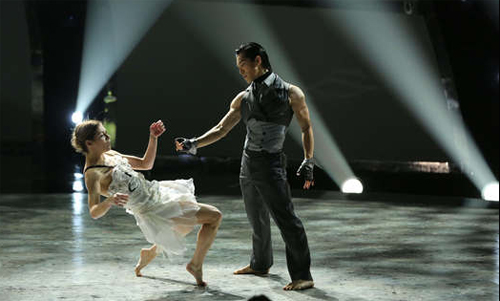 Will with all-star Lauren Hip Hop choreographed by Christopher Scott
I loved Will’s easy-going, yet serious and precise take on his first hip hop routine. The couch dives he and Lauren did towards the end were amazing, and dangerous looking too. It was great to see Will have the chance to be serious. 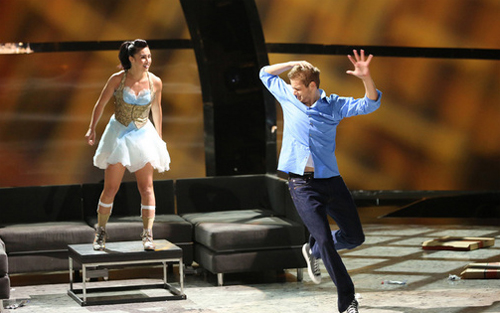 Eliana with all-star Ryan Quickstep choreographed by Jonathan Roberts
Okay, I can’t just do a top three… this week there’s a fourth. Quicksteps are often the kiss of death on SYTYCD, but that was broken last night with Eliana and Ryan. They had great musicality. She did so good outside her genre (ballet). The tricks from sliding the chair out from under Ryan at the start through the insane lifts at the end was incredible. 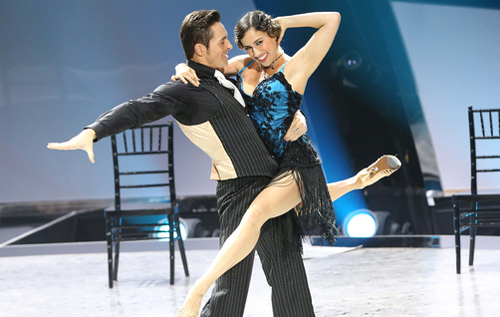 Here’s a look at the other couple routines, in the order they were performed.

Witney with all-star Twitch East Coast Hip Hop choreographed by Luther Brown
Brown, in his first SYTYCD choreographer appearance, offered up a great number and Witney and Twitch nailed it. She had some good, sexy swag and kept up with her all-star partner. You forgot for 90 seconds that she’s a ballroom girl.

Lindsay with all-star Alex Jazz choreographed by Sonya Tayeh
I so badly wanted to put this in the top three (or four), but Lindsay didn’t provide the necessary characterization. She danced the number excellently from a technical point of view, but she didn’t make the needed connection to Alex. Alex, of course, did a fabulous job. Sonya created an amazing number that used the quirky musicality of “Someone I Used to Know” perfectly.

Cyrus with all-star Melanie Jazz choreographed by Mandy Moore
This number just didn’t work for me. I didn’t care of the song. The choreography didn’t engage me. Cyrus and Melanie tried to sell it the whole way, but I just didn’t connect for me.

Tiffany with all-star Ade Contemporary choreographed by Mandy Moore
This was a fantastic closing to the show. The number of tricks in this routine were ridciulous. Particularly impressive was the assisted run/lift at the end.

How were the solos? Here’s a quick take on the eight solos from the evening in the order of performance: Tiffany showed some great musicality and her fall to the floor was awesome… Will was serious here too and he once again impressed with how he moves his super tall body… Lindsay didn’t really work for me as she seemed to do half a tango… Chehon was simply beautiful as he displayed such fluid movement… Witney offered up some great funky ballroom moves… Cole brought out his awesome ninja dancing… Eliana brought out some gorgeous ballet… Cyrus dazzled with some animation.

Eliminations:
At this point in the show, with such talent remaining in the competition, the eliminations are painful and tonight was no different. I didn’t want to see anyone sent home. For the girls Lindsay and Witney (the best friends for years) were in the bottom two. On the guy side–in a surprising turn for how the voting went–Cole and Will were at the bottom.

The judges saved Witney and Cole. Given who the bottom two were, this was the right choice… even though I’m devastated to lose Will. Lindsay hurt less because of her lackluster turn she had with Alex.

Two more weeks to go. Next week it’s top 6… and then it’s down to top 4 and the finals!
I want to see Cole and Eliana walk away the winners.