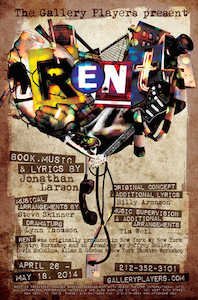 Yes, I’ve seen Rent more than a few times–on Broadway, on tour, and most recently in its 2012 off-Broadway staging at New World Stages. Yesterday afternoon was the first time I’ve seen a production that wasn’t directed by original director Michael Grief. Brooklyn’s Gallery Players are in the middle of a run and it seemed a good opportunity to see the show again.

The Gallery Players production doesn’t create anything revolutionary with the work, although there are differences in costume and blocking that put some new elements in place. All of the choices worked. In particular I liked the staging for “Seasons of Love” where there were groups of people on the stage, rather than the traditional straight line across the front, and they all held candles. It was a smaller stage and a smaller space (by my rough count there were approximately 100 seats). 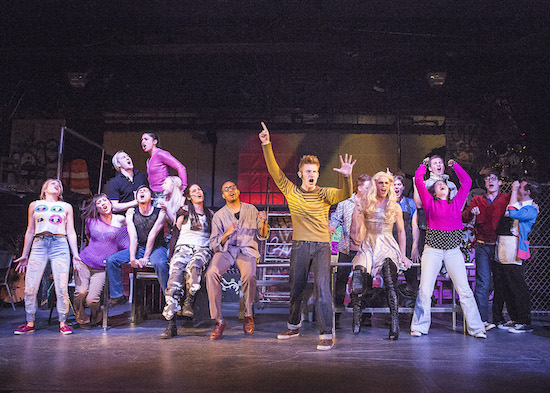 The cast was outstanding. Of everyone, Dwayne Washington as Collins was sublime and owned the show. He was playful in numbers like “Santa Fe” and “I’ll Cover You” but he turned devastating in the reprise of “I’ll Cover You” during Angel’s funeral. Dale Sampson as Mark was wonderful in both voice and acting. I’ve seen some clunker Rogers over the years, but Isaac Matthews was perfect. His “One Song Glory” was tragic and “Without You” along with “Your Eyes” were heart wrenching. Tara Novie was great as Mimi hitting all the right notes between the rocking “Out Tonight” and the more subtle “Goodbye Love.” Mara Jill Herman’s Maureen at times seem to honor Idina Menzel’s work, but she also put her own mark on the role, especially in “Over the Moon.” She also had perfect chemistry with Tunisia Renee as Joanne. Their “Take Me or Leave Me” was spectacular. 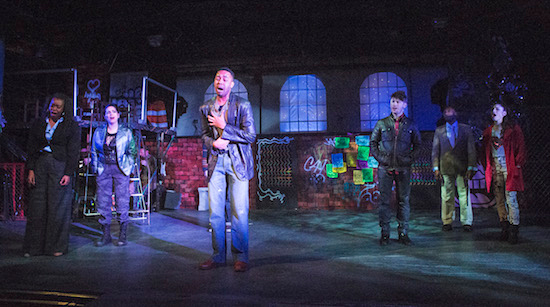 There were a few issues with the show. I believe the Angel for yesterday’s performance was an understudy. There was an announcement made of an understudy that I couldn’t understand, and the person in the production photos doesn’t look like the person I saw yesterday. Angel was a weak point for the show. The chemistry with Collins was practically nonexistent and the actor’s voice was weak and tentative as was their movement. It was a disappointment since the Collins/Angel story is one of the show’s primary story arcs. 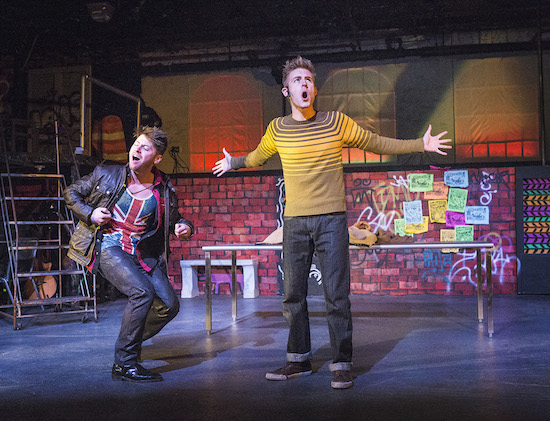 Sound design was also a significant issue. Not everyone in the cast of 20 had mics and for those that did the mics weren’t always at the right level. Despite the small space, voices didn’t carry far if they weren’t mic’d because of the loudness of the band. It’s too bad the sound issues weren’t sorted out during the show’s tech rehearsals. I know the show well enough I didn’t miss anything, it’s just too bad these good actors are hindered by tech that doesn’t always work.

I did love that the back wall of the set had a replica of an ad from the original Broadway production of Carrie. I’m guessing this was supposed to be a billboard somewhere in the East Village. It was a hoot seeing it there painted on the wall at stage left. None of the production stills show it, so I grabbed the original art just to display it here. It fit the time period since the show is set in 1989 and Carrie ran in ’88. You can imagine the ad abandoned on the side of a building.

I’m glad I went into Brooklyn to see the show. If you’re in NYC, you can see it through next Sunday afternoon and I definitely recommend it.