Carrying the Banner for “Newsies” 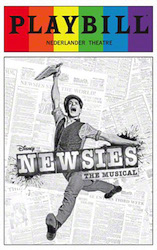 I made a return trip to Newsies on Wednesday night. I’ve talked about doing that since I saw it back in March 2012, just a day before it officially opened on Broadway. I liked it a lot the first time, but it was even better this time out.

I’d written in the original review that I thought the story came across as superficial. I’m not sure if I was too busy focusing on other elements of the show, but I didn’t get that at all seeing it this time. The plight of the newsboys is pretty compelling and when you add in all the great songs and dancing it plays very well.

Corey Cott, the current Jack Kelly, is a great successor to original star Jeremy Jordan. His singing is superb, especially the wrenching “Santa Fe” the closes Act I. He’s got great chemistry with Liana Hunt, who plays reporter Katherine.

The dancers are all in outstanding form, making the Tony winning choreography look effortless. It was cool to see that Evan and Jess, from So You Think You Can Dance, are still with the show. They’ve been joined by Nico, another SYTYCD alum.

One of my favorite characters in the show is Specs. It’s a dance-heavy role and the character usually ends up in the front doing some outstanding moves. The original Specs, Ryan Steele (whose now in Matilda) was amazing. The role is now played by John Michael Fiumara, who is also outstanding. It also doesn’t hurt the these guys are ridiculously hot. There’s a moment at the top of Act I as the newsies are getting ready to start their day that Specs has no shirt on. All I can say is mercy! Below a quick photo tribute to the two Specs–Ryan on the left and Michael on the right (with one of his dance teachers). 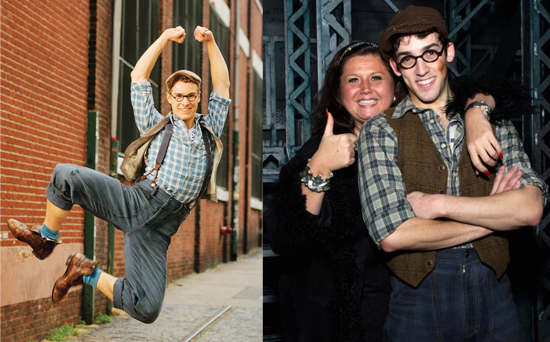 And you can’t post about Newsies without a video showing off their moves. Here’s the original cast, performing on The View from 2012. This shows the tremendous dance number “Seize the Day” and ballad “Santa Fe.”