Knowing Where You Live 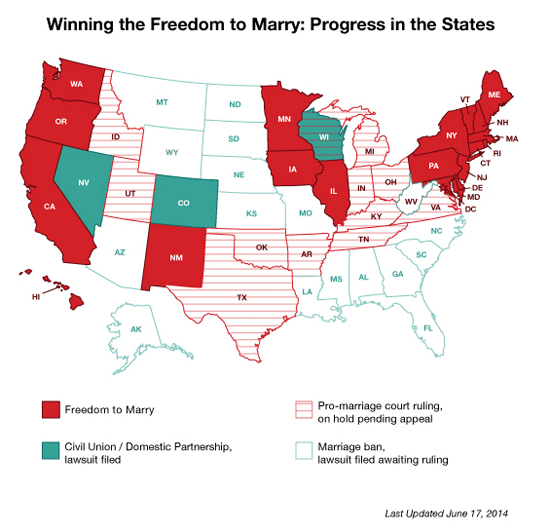 Last week saw more progress on marriage equality with positive court rulings in Indiana and Utah. This follows several similar rulings that have come over the past few months. It’s coming so fast, in fact, that the map above isn’t completely accurate since its from June 17, but it’s the most current I can find.

Equality’s been on my mind this week due to a few conversations I’ve had with friends relating to our decision to move back to California. Specifically the questions came from friends in Alabama asking if we’d considered moving there.

Fact of the matter is that we had considered it. While we were working with my mom’s estate last year, Will and I talked a few times about possibly moving there and moving into her house. There were a lot of advantages to this: the house was paid for, we had friends there and the West Alabama region has some good recreational activities.

What Alabama doesn’t have is marriage equality. Yes, there are lawsuits working through the courts there. But if Will and I moved there right now, we wouldn’t be married where the state was concerned. Sure we’d lived without  those legal protections for more than a decade. Now that we’ve got them though, we’re not going to give them up.

The people I had these Alabama discussions with didn’t know we’d face that issue if we moved there. It begs the question: Within the 30 states that don’t currently have marriage equality, how many people in those states know their state discriminates? Are they okay with that discrimination? The friends I discussed this with aren’t for discrimination, yet they didn’t know the state they lived in actively discriminated.

It’s great to see the progress that have been made in the first six months of this year. How much further would the cause be if people knew what their states were doing? As the year goes on, hopefully more states will wake up and make it possible for LGBT families to move anywhere they want without loosing rights.