The Country House & On the Town 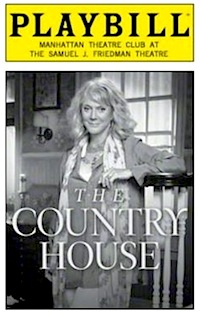 On our recent post-GRL trip to NYC I got the chance to partake of some of Broadway’s most recent offerings.

First was the new Donald Margulies play The Country House. Blythe Danner is the matriarch of a quirky theatrical brood who gather at the family house in Williamstown for the summer season. Most are starting rehearsals for upcoming productions, but the gathering also coincides with the death of Danner’s daughter the year before. A dramatic set-up for sure and there-in lies the problem. In an interview with Margulies in the back of the playbill, he insists the play is a comedy. The Country House isn’t particularly funny. I’d consider it more of a drama with funny moments.

Blythe Danner is gorgeous and she digs into the role of a famous (and somewhat fading) actress with gusto. The rest of the cast is terrific too, it’s just that the play itself suffers from a bit of an identity crisis, making it a good, but not great evening at the theatre.

I also had a chance to see On the Town and I freaking loved it! Based on the dance piece Fancy Free by Jerome Robbins, On the Town is the story of three sailors on 24 hour shore-leave in New York City. One of the boys spots a poster of the current Miss Turnstiles and is determined to meet her. His friends decide to help him out and hilarity ensues.

Jeff and I saw the last revival in 1998. Other than the fact that it featured Lea DeLaria and Jessie Tyler Ferguson, I don’t remember much about it. This current production is perfectly cast and beautifully designed. Did I mention how much I freaking loved it! 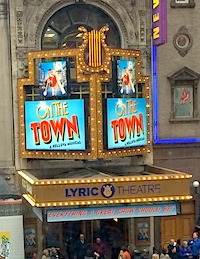 One thing that struck me about this production was that this is very much a ‘dance’ show. The ’98 version was very troubled and I believe that huge sections were cut out when the choreographer was fired. The 2014 version really opened my eyes. Not only does it feature hilarious book scenes (by the incomparable Comden & Green) and terrific songs, there’s an incredible score by Leonard Bernstein that is augmented with wonderfully energetic choreography by Joshua Bergasse. I particularly loved the Coney Island dream ballet in act 2.

I enjoyed both shows a lot, but if you’re in New York, I can’t recommend On the Town enough.

Jeff and I also saw the star-studded production of Terrence McNally’s It’s Only a Play. You can read Jeff’s review of it here.