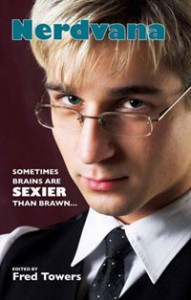 Nerdvana is an anthology, edited by Fred Towers, that looks at the interactions between geeks/nerds/brainiacs and men who are not usually attracted to them. The 15 stories cover a great cross-section of geekdom. As a geek myself I found most of the stories to be quite enjoyable as the geek tends to win the day and the guy.

Here’s a look at my favorite stories in the collection: Jay Starre’s story about robot building geeks has me laughing out loud a couple times. There was no non-geek in this story and it didn’t matter, the geeks had a lot of lusty fun on their own. “The Wood Wizard” from J.D. Walters appealed to my college days of playing D&D. Nothing like this happened in the games I played in, but it’s nice to know it can.  “Exposed” from Bryl R. Tyne went inside the corporate world a little bit. It’s the longest of the stories and is my overall favorite becuase of how well the paranoid but adorable character of Clay was written. Augusta Li’s “A Night in Midgar” was set in a comic/sci-fi convention. Again the cons I went to never worked out like this one did, but it was a great story with a great romantic line running through it. “The Grand Deception” by Stephen Osborne told a typical tale of a jock tormenting a geek, but with a great twist that I both loved and hated (hated might be too strong… more like disappointed that it had to be that way, but it certainly worked inside the story).

One story in the set disturbed me. “The Bully on the Playground” by Helen H.E. Madden. It’s another jock tormenting the geek. I was okay with the fact the geek is kinda into being bullied. I won’t spoil the story by giving away the ending, but it left me feeling grossed out and creepy.

I was pleased to see that my own contribution–“The Adventures of Jake #1,” about a guy who works in a comic book store and in a theme park dressed up as a superhero–seemed to fit good into the collection. Hopefully others who read the anthology will feel the same.

Up next: The Best Revenge by Andrew Grey