This past week, from Wednesday through Sunday, Will and I were in Atlanta to attend this year’s GayRomLit retreat, along with the first ever GRL Writers Workshop. It was a great weekend, full of new friends, reunions with some friends we don’t get to see often and some educational sessions and discussion as well.

Writers Workshop
The Writers Workshop on Wednesday was a great addition to GRL. Will and I did some of these sessions together and some separate in an effort to get as much information as possible. The “Romantic Comedy” workshop by Z.A. Maxfield and Ethan Day was enlightening for me and at the same time made me wonder if I could ever write a comedy. I’m not sure my brain works the right way to create that. “Seeking Publisher Charming” with Clare London and Heidi Cullinan was great in helping to point out what you should look for in a publisher.

Lunchtime featured a talk from KA Mitchell. KA was funny, inspiring, and everything you could want in a speaker. I’m glad I was part of the writer’s workshop so I could hear from her. 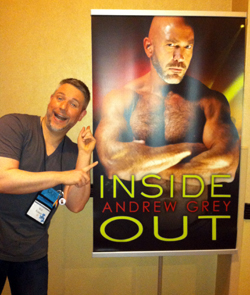 In the afternoon, I got a lot of information on online marketing from Joyful Jay and Lori from the Goodreads M/M group, which is important for me these days as I keep working to market Hat Trick. That was followed by a session on branding and how to take control of your author brand, which was run by Ariel Tachna and Tara Lain. This is something Will and I have discussed a lot lately as we’re trying to create our own JeffandWill brand. I topped off the afternoon with “Dirty Questions,” moderated by Andrew Grey and Geoff Knight. It was a funny, insightful look at the steamer parts of romance writing.

GayRomLit
GRL kicked off Thursday morning with a combination of the swag room opening, so you could get goodies from your favorite authors as well as an autograph session with supporting authors. I hit both of these, loading up on some cool pens, chocolates and other spiffy items. I also met Jeff Erno in the autograph session and got one of his Dumb Jock books autographed.

For sessions, I kicked things off in the “Rock of Pages” spotlight panel, finding out from Clancy Nacht, M.J. O’Shea and Erica Pike what it’s like to set stories in the world of rock and roll. After that, I shifted to a Q&A featuring J.P. Barnaby, Cat Grant and Julie Lynn Hayes. These ladies read from their books and took questions about their process and characters. J.P. really caught my attention and it’s clear I need to read more of her books, especially her Little Boy Lost series. Something I’ve been intrigued by in the romance genre is the subgenre of working with shifters, werewovles and other supernatural creatures. I got a lot of insight from Stephani Hecht, Amber Kell and RJ Scott. This is a genre, like RomCom, that I’m not sure I could ever pull off, but it was interesting hearing from these three on their characters and process.

On Friday I started the morning listening to authors from one of my favorite romance subgenres: cowboys! Andrew Grey, Zahra Owens and Carol Lynne talked about their love of cowboys, where their inspirations come from and how they get all the cowboy details right. Next up was a trio of readings from Ethan Day, reading a hilarious story he wrote with Geoff Knight for the Zombie Boyz anthology (which I was lucky enough to snag a copy of, and get autographed, during the weekend); Z.A. Maxfield, reading from Drawn Together (which I need to get after hearing the reading); and Anna Martin, reading from her latest release Cricket. Another genre I’ve wanted to write in is the thriller/action-adventure/mystery area, so it was a natural for me to go to that panel with Geoff Knight, JP Bowie and EM Lynley.

Friday afternoon raised money for charity with some fun and crafting events. Around $1500 was raised for Lost-N-Found Youth, which helps homeless LGBT youth in Atlanta. We went to the body painting event hosted by J.P. Barnaby. She gathered some professional go-go boys as well as some a few daring GRL attendees to strip to their undies and let themselves be painted for charity. Below are a few pictures from the event–me with Geoff Knight, a look at the line of painters and paintees and the super cute long-haired guy who was among the painted. 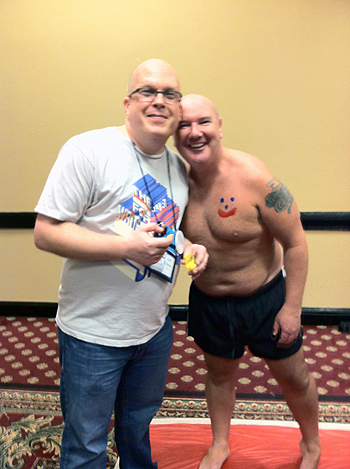 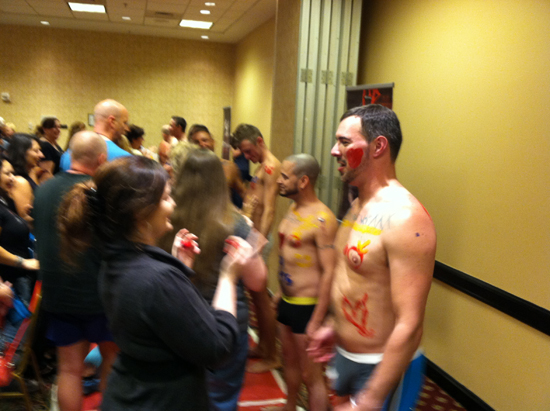 Saturday opened with a panel on breaking hearts helmed by KA Mitchell, Amy Lane and J.P. Barnaby. It was excellent hearing from these masters how the craft their tales.Next up was a panel on horror and suspense with Ally Blue, Rick Reed and Marguerite Labbe. Here’s another genre I’m not sure I could tackle, but it was great to hear from this trio what scares them and what they will and won’t write. Next up was another trio of readings. Clare London read from her new Flying Colors, Tere Michaels read (and sang…sang spectacularly!) from a work that’s part of a mix tape anthology and Damon Suede read from the brand new Bad Idea.

Saturday wrapped up with a three hour book signing party, featuring the 70 “featured” authors at GRL. Will and I had a great time here getting authors to either sign books, or our GRL program (which sort of acted like our yearbook of sorts). It was great chatting with the authors and attendees during this event. We’ve got two pics from this event: Me with Damon Suede as he signs Bad Idea and me, J.P. Barnaby and one of her cover models. 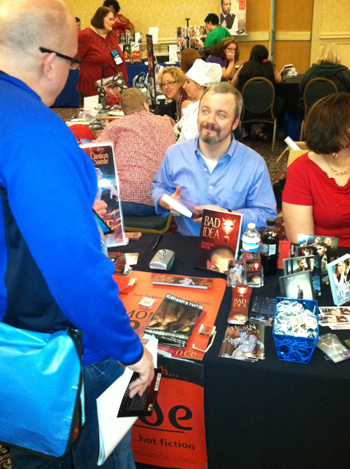 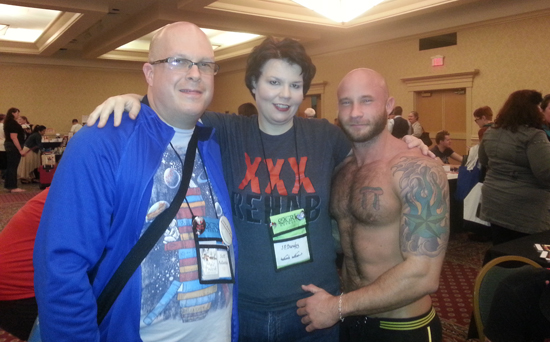 Some other highlights from the four and a half days:

I hope I’ve covered everything. If I remember a highlight that I missed, I’ll come back and add it in. Will may do his own post as well or add to this one.

In closing, here’s the photostrip we made at the photo booth that was set up for people to use at the very end of the retreat. It’s cute, especially the second photo.