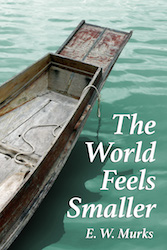 I’m excited to welcome Elvis Murks to the blog. I’ve known Elvis since we were students in the journalism program at The University of Alabama in the late 80s. He’s a valuable member of the Hat Trick beta reading team and I’m thrilled he’s just published a short story of his own: The World Feels Smaller, under the pen name E.W. Murks.

The story is absolutely beautiful and focuses on two characters: a brokenhearted young man determined to put his life back together as he travels through Thailand, and an older woman who serves as his guide on a river boat, who helps him in ways he never saw coming. Beyond the poignant characters, the setting is perfectly drawn, making the reader feel like they are passengers with them.

I interviewed Elvis about his pen name, the story, self publishing and what’s next. He’s also offering up a free copy of the story to one commenter (more details on that at the end of the post). Now, let’s find out more about Elvis. 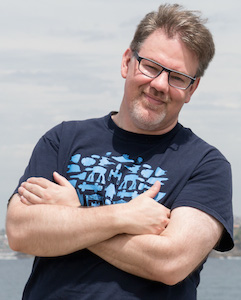 I’ve always known you as Elvis. Why E.W. for this?
When I was younger I promised myself I would never use my first name on the cover of a book. I hated the name “Elvis” for obvious reasons… kids can be very cruel. Plus I always thought it would distract from the cover and the title. So I decided I would use my initials instead, in this case, “E. W.”, just like my favorite author J. R. R. Tolkien. And while that was a long time ago, I still went through with it! I’m E. W. Murks on the cover of The World Feels Smaller. I still feel the name might be a distraction, but it could just as easily be an attention-getter. Who knows. Hopefully I won’t come to regret it. But it is an eBook after all, so the cover and content are easily changed.

Sounds like you always wanted to be a writer.
As a teen I was convinced I’d be a writer; the stories flowed easily like water from a tap. But in my early 20s I lost my way, the dream drummed out of me by the rigors of real life. I forgot how to write… But it’s never too late to remember, and no time like the present to pursue that dream of being a writer.

What was your inspiration for this story?
The World Feels Smaller is a touch autobiographical, and draws upon my experiences visiting Thailand in the late 1990s. It’s a beautiful country filled with a warm and gracious people, and seemed the ideal setting for story about a young man on a journey trying to mend a broken heart. 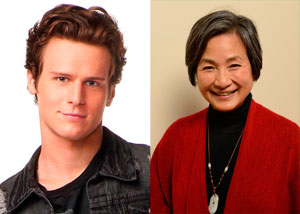 If you were going to cast a movie, who plays the traveler and who plays the woman?
Oh, that’s a tough one. Hmmm. For the traveler I would cast Jonathan Groff, for obvious reasons 🙂 As for the woman, I would probably choose Pei-Pei Cheng, who appeared recently in the wonderful indepenent film Lilting. Cheng was amazing in a quiet, but powerful performance.

What authors do you tend to read and draw inspiration from?
When I was a teenager I read voraciously. I drew a lot of inspiration for my writing at the time from Tolkien, Stephen King and Douglas Adams. Since I’ve recently started writing again, the works of David Levithan and Armistead Maupin have been major influences.

You went the self publishing route for this story. Why did you choose that and what was the experience like getting it set up?
Well I could have shopped it around, and perhaps been lucky enough to get it into an anthology or something similar. But that could have taken months, and I didn’t want to wait. I wanted to get it out there for people to read and hopefully enjoy, so I decided to self-publish. I’m using the service Smashwords to push the story out to all the major ebook sellers including iBooks, Amazon, and Kobo. It was a pretty painless experience, and would recommend it to anyone who is interested in going the self-publishing route.

What’s your writing process? Do you plot everything or fly by the seat of your pants?
I have tendency to over-plan and over-outline to the point that it takes the fun out of writing, and it becomes a chore. Since I’m trying rekindle the writing passion of my youth, that’s the last thing I want to happen. So most of the time I prefer flying by the seat of my pants; it’s a much more organic and free-flowing process, even though there are always structural issues I have to deal with later.

What’s the next year hold for you writing wise?
I’m hoping to publish one more short story this year, and then write some longer-form fiction next year. I’m over sixty pages into a novel that’s been on the backburner for a while that I would love to revisit. I’m also hopeful that I will be collaborating with colleagues on future projects in the new year.

I’m part of Elvis’s beta reading crew so I’ve read some pieces of what he’s working on, so I’m hopeful that he keeps writing! There’s some cool stuff coming!

Blurb:
Still recovering from a painful breakup, a young man travels to Thailand for the first time hoping put the past behind him. What he encounters is a strange and exotic land that reminds him of everything he had lost, yet still manages to bring him comfort when he least expects it.

Where to Buy:
iBooks
Barnes and Noble
Kobo
Smashwords

Bio:
Elvis is a web developer and amateur photographer trying to fufill the dream of his youth: becoming a writer. He lives near San Francisco with his husband Chad and their beautiful ragdoll Zoe. You can reach him on Facebook at https://www.facebook.com/author.ewmurks

Giveaway:
Elvis is offering up one ebook copy of The World Feels Smaller to one lucky, random commenter. You’ve got until 11:59pm ET on September 29, 2014 to comment (only one comment per person will count for the drawing).