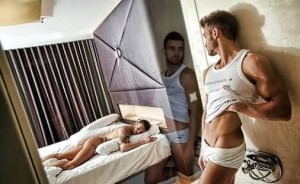 About a month ago I did a Flash Fiction Friday related to a picture prompt (seen at left) from Prism Book Alliance. The story, titled “Who Are You?” went up yesterday on Prism. You can read it here.

I’m thrilled by the feedback the story’s received in the Prism comments.

The story, as someone noted in the comments, is far different than the Hat Trick series. Truth is, it’s far different from anything I’ve done previously. There are elements of a spy story in it, and that’s a genre I’ve always wanted to play with but have never had the guts to do it.

As thought about the picture and what I could do with it, Geoffrey Knight’s Fathom’s Five series came to mind. I love this series, which has a fourth book coming out later this year, because it’s Indiana Jones mixed with James Bond mixed with some hot guys who are out trying to bring evil to justice. I tried to go in that direction.

Based on the comments, it’s likely I’ll try to expand this story next  year after I complete the final Hat Trick book. In the meantime, I’ll definitely use Flash Fiction Friday to play with other genres to see what directions my storytelling might take.