GayRomLit 2015 has come and gone and its taken me way too long to get the wrap up blog post done. Some of that can be blamed on the fact that Will and I spent a couple days at Disneyland right after GRL and then had a two-day drive home…some of it is just processing the whole awesome thing enough to write about it.

This year’s retreat was excellent, as always. It’s the first year that it feels like I came into GRL with some decent traction for my books while at the same time I feel like I got discovered by a good number of new people as well. Hopefully that carries over into 2016 with the slate of stories I’ve got planned to write. 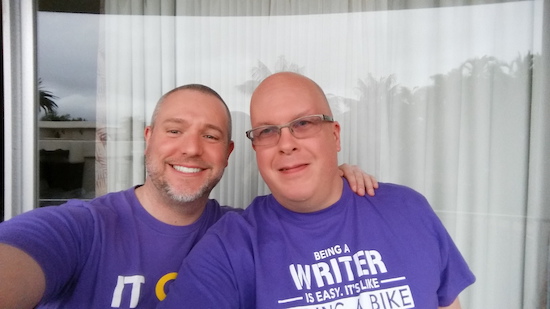 With GRL in California this year we were able to make a road trip out of it. Although the two drive, especially going South, was long, it was a good way to make the journey since we didn’t have to ship anything or worry about luggage restrictions. It also meant we had a car with us–handy since we made a trip to the grocery store for snacks and also went off-site Friday night to see In Your Arms at The Old Globe. 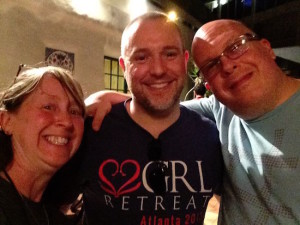 We got in to the Bahia Resort around six Tuesday night and after we got settled we connected with our good friend Wade Kelly for dinner and a first round of catching up. I also got my books set up in the booksellers room. I’m very happy that I bought into the Indie Pub Authors table, which gave authors who indie publish and/or work with publishers who weren’t present the chance to have their books available all weekend rather than just at the signings. Not only did I enjoy working at the table for an hour a day, but it was great to chat with the other authors at the table as well as readers who were coming by. I also sold the majority of what I brought with me (with a huge hat tip to Brandilyn from Prism Book Alliance who did a great job of hyping my books at the table Saturday morning).

Wednesday was writer’s workshop day. The highlight of workshop for me was Amelia Vaughn’s session on “Changing LGBTQ+ Narratives.” Vaughn, the marketing manager for Riptide Publishing, talked about the array of “labels” being used these days as the spectrum has gone far beyond LGBTQ to include nearly a dozen others to define sexuality and gender. Further she discussed how writing a “contemporary” romance needs to take into account a world where there’s marriage equality and no don’t ask don’t tell, but considering there are still laws in some states where people can be fired or denied housing for being gay. It was a very insightful presentation.

Thursday saw the retreat get fully underway with the opening of the swag room as well as the supporting authors signing. I also hung out in the author’s lounge for a while on Thursday afternoon talking with both authors and readers. There was a batch of author readings on Thursday afternoon that I enjoyed with Arshad Ahsanuddin (I need to pick up some of his sci-fi books as I enjoyed what he read from Zenith: The Interscission Project #1), Shira Anthony (she read from her forthcoming Dreamspun Desires book, which I need when it comes out) and Kim Fielding (I snagged a copy of Astounding! because I enjoyed the reading so much).

Thursday night was Dine with an Author and the dinner was a luau setting which was cool, especially the fire dancing that took place for entertainment. I had a good time co-hosting a table with Morticia Knight and talking with those who sat at our table as well as an adjacent table. We also checked out the evening party, Juke Joint, for a while but didn’t stay too long.

Friday we caught an early reading from our friend Clare London, who did a wonderful reading from Slap & Tickle – With A Kick #3. That was followed by a Storyteller Spotlight called Wheel of Destiny. Here Poppy Dennison, Wade Kelly and SJD Peterson talked about setting up a new story, including naming characters, determining background and employment, where they meet, etc. The audience got to pick everything by offering suggestions and seeing where the wheel would land. The authors say they’re going to make a story out of the nine plot points they got from the workshop. I’m eager to see how it comes together. 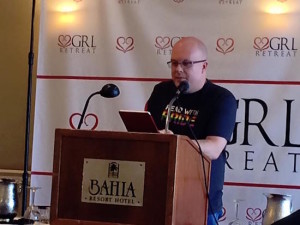 In the afternoon I did my very first reading at GRL. I was just a touch nervous because, even though I’ve read at Rainbow Con and Rainbow Book Fair, reading at GRL is a significant milestone for be. It felt special to get to read  at this event. I did a bit of chapter one from the first Hat Trick book so people could meet Simon and Alex in case they were unfamiliar with the series (Will did a great job recording the reading and you can watch it on YouTube). I enjoyed hearing the readings from the other authors in my timeslot too–James Buchanan (and I wish I could remember what she read from) and L.C. Chase (who read from a forthcoming book).

Saturday I enjoyed Tara Lain, Amy Lane and Z.A. Maxfield talking about “Why Quirk is our Kink” and how they find all the quirky parts of their characters to write about. After that was the massive featured author signing, which I took part in. This two and a half hours was a great time to meet and talk to everyone. I had good company at made table as I was between Brandon Witt, who I got to chat with for a few minutes (somehow we’ve never talked much before) and Wade. In the evening we hung out a bit at the costume party checking out everyone’s apparel, but again we were tired and didn’t stay for more than about 30 minutes. Luckily everything was well documented on Facebook so we could see the awesomeness the next morning.

Sunday was the farewell brunch, which is always sad as you make your goodbyes.

Some super highlights of GRL:

We didn’t shoot a lot of pictures at GRL this year as we were too busy taking it all in, but there are more than are in this post and you can see them on our Flickr album.

Next year is in Kansas City. I’m not 100% committed to that yet, but as Will and I plan our 2016 travel we’ll see how a trip to the middle of the country fits in.