Cool Cinema Trash: Yor the Hunter From the Future (1983) 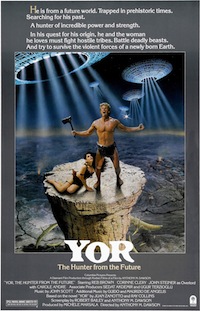 What happens when you cross the sword and sorcery of Conan the Barbarian (1982) with the sci-fi cheese of Flash Gordon (1980)? You get the high camp adventures of a barbarian named Yor the Hunter From the Future (1983). Directed by Italian genre mainstay Antonio Marghetti (aka Anthony Dawson) and shot entirely in Turkey, Yor is a weird, wild and unintentionally silly ride that is sure to induce laughter in even the most jaded cinephile.

What it’s all about: You know you’re in for a good time when the film opens with the rousing theme, “Yor’s World”. The songwriting team of Guido and Maurizio De Angelis were clearly inspired Queen’s raucous score for Flash Gordon, but in this case they’ve managed to fashion a one of a kind tune that’s nearly impossible to understand. Ask ten people what the lyrics to “Yor’s World” are, and you’ll get ten completely different answers.

Once the opening credits are complete, Cave gal Ka-Laa (former Bond Girl Corinne Clery) and her elderly companion/father figure Pag (Luciano Pigozzi) get busy hunting a piglet in a dinosaur costume. They are suddenly attacked by an animatronic triceratops. Blonde barbarian hero Yor (Reb Brown) hears their cries and quickly springs into action. With a few well-placed swings of his stone axe, Yor dispatches the beast and drinks its blood. He offers some to his new friends, “Drink. The blood of your enemy makes you stronger. I’m Yor the hunter. I come from the high mountain.” Pag admires his taste in jewelry. Setting up a future plot point, he asks where Yor’s medallion came from. “I’ve had it ever since I can remember.”

Yor is invited to join the tribe’s feasting and frivolity. Ka-Laa does a special hip-swaying dance routine just for Yor, but their tentative flirtations are put on hold when the village is attacked by a horde of hairy purple-faced Cro-Magnon men. Murder and mayhem ensue. Yor does his best to defend his new friends and escapes to the river with Ka-Laa.

Their freedom is short lived when Ka-Laa is kidnapped and Yor is tossed over a cliff. But it seems that you can’t keep a good barbarian down for long, he climbs back up the mountainside and goes with Pag in search of Ka-Laa. They find her in the Cro-Magnon’s cave hideout. They wait until nightfall for the right moment to attack.

In a scene that is spectacular in it’s absurdity, Yor uses a bow and arrow to shoot down a “creature of the night”. He uses the bat-creatures body as a hang glider and swoops in to rescue Ka-Laa. Yor then unleashes the waters of an underground lake, washing away his Cro-Magnon opponents.

Yor, Ka-Laa and Pag journey into the desert for the next phase of their adventure. “I’m afraid death rules this land,” Ka-Laa tells her beloved before he sets out in search of the mysterious woman who wears a golden amulet just like his. He comes across a band of leprous desert dwellers who chase after him with torches. After he is captured, he is brought to the beautiful blond who serves as their queen. Roa (Ayshe Gul) has the same medallion as Yor, but knows nothing of their origins.

Before he can be sacrificed, Yor battles the diseased cave-dudes with a flaming sword, escaping with his new lady-friend in tow. Ka-Laa is less than thrilled with the latest addition to their merry little band. They construct a raft and head down river Huck Finn-style.

“Do you know that I have never belonged to another man,” Roa tells our hero by the side of a romantic waterfall, “I have never felt the desire, the longing I feel now for you.”

“You cannot understand,” Roa says, insinuating that she and Yor have a very special bond.

Drawing a knife, Ka-Laa assures her, “I understand… that one of us must die!”

Don’t fuck with Ka-Laa ‘cause she’ll cut ya!

Before the girl fight can really get started, the purple cavemen barge in, spoiling all the fun. Yor rescues the gals and goes mano a mano with the chief Cro-Magnon who anachronistically shouts, “Die! Die you bastard!”

Roa is conked on the head during the melee and, with her dying breath, tells Yor she remembers their people come from a far away island in the middle of the sea. “We’ve all lost loved ones,” Pag philosophizes, “But life goes on.”

At the seashore, the trio are enjoying the good life when they hear the desperate cries of someone in peril. Yor and his pals come to the rescue of Tarita (Marina Rocchi) who is being menaced by a clumsy looking dimetarodon. They kill the beast and Tarita offers herself to Yor in thanks who, it seems, has finally learned his lesson concerning the opposite sex. “You’re a sweet child Tarita, but I already have a woman.”

They head to the seaside village where her people watch the skies for the return of a fiery bird. It seems they recently killed a man who fell from the sky and fear that more is to come. The village later comes under attack as lasers fill the night sky. Yor vows to avenge the deaths of Tarita’a people and sets sail for the island Roa spoke of. Yor, Ka-Laa and Pag are immediately besieged by a huge storm and crash on the very island they were searching for.

With little explanation, the film switches genres at this point, going from a silly barbarian adventure to an outlandish sci-fi fantasy.

Yor awakens in a laboratory where Ena (Carole Andre) tells him that his parents were rebels who escaped the island but died soon upon their arrival in the primitive outside world. The Overlord (John Steiner) watches from the safety of his throne room as Yor searches the catacombs of the city for his friends. Yor eventually reunites with Ka-Laa in a maze of mirrors.

Back in the laboratory, the Overlord reveals his plans for Yor, “You are to be the forefather of a new race together with Ka-Laa, this genetically perfect woman as your mate. I am experimenting with a new type of android which requires the seed of a specimen like yourself.” Ena and her rebel friends stop the Overlord from performing a mind-altering operation on Yor and quickly set about battling the robot bad guys.

To destroy an atomic reactor, Yor must swing across a wide chasm to set a bomb in place. Once the device is set, Yor is trapped, so Pag executes some fancy trapeze work and swings to Yor’s aid. Amusingly, obvious miniatures are used in this rescue sequence. Once the Ken doll/Yor stand-in has swung safely back to the other side, our hero confronts the Overlord. The climatic confrontation is over rather quickly when Yor picks up a pole and tosses it javelin-style, impaling the Overlord. With half a wooden dowel sticking out of his gut, the Overlord tries to diffuse the bomb, but the explosion sets off a chain reaction, destroying several miniature sets.

Yor and his friends escape in a jet fighter, the craft literally sailing off into the sunset.

In conclusion: If Yor’s adventures seem episodic, it’s because the film was originally made as a four part series for Italian TV. After it aired, the show was edited to 90 minutes and released theatrically. This is the version most fans are familiar with, the complete television version being extremely rare and nearly impossible to find. CCT’s review was based on the 90 min. cut. A search on the Internet reveals that he main difference between the two versions seems to be the length of the fight scenes. Yor’s fights with the Cro-Magnons as well as his encounters with the dinosaurs are longer and bloodier. One scene that didn’t make the cut features Yor and Ka-Laa battling a snake-like creature in a tree trunk where they hide after the first Cro-Magnon attack.

I just found this sing-a-long version of the theme song and it’s better than I could’ve ever dreamed! Yor’s World!