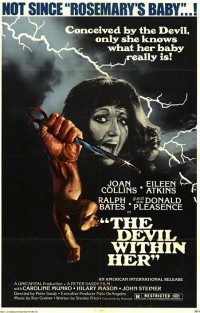 What it’s all about: As a sweaty Joan Collins writhes and moans during a particularly difficult childbirth, doctor Donald Pleasence comments to a nurse that, “This one doesn’t want to be born.” When you have Donald Pleasence for an obstetrician, you know you’re in big trouble. The Devil Within Her (1975, also know as I Don’t Want to Be Born) is a wonderfully wacky mish-mash of ideas liberally borrowed from other, more successful horror movies like Rosemary’s Baby (1968) and The Exorcist (1973).

When proud father Gino Carlesi (Ralph Bates) visits his wife Lucy (a pre-Dynasty Joan Collins) in the hospital, he finds her with bloody scratches on her cheek courtesy of their newborn son. “Maybe she was cuddling it too tightly,” Dr. Finch (Pleasence) explains, “Even at this age, babies have an extraordinary instinct for survival.” The uneasy couple brings their son home and they are greeted by efficient housekeeper Mrs. Hyde.

Gino’s has a sister who is, in fact, a sister. A nun that is. Sister Albana (Eileen Atkins) has come all the way from Italy for a visit. Gino greets his sister with a welcoming cascade of Italian endearments. “We are only going to speak English.” She insists. English, that is, with really bad Italian accents. Why talented British born actors like Bates and Atkins are forced to adopt such crazy accents is anybody’s guess. This is just one of he many instances where The Devil Within Her sabotages itself with odd production choices and absurd plot devices. Really, would an Old World Italian Catholic nun (with a bad accent) be any better suited for an exorcism than a Sister from the UK?

Lucy is paid a visit by glamorous pal Mandy, played by an oddly dubbed Caroline Munro, whose crazy cockney accent would sound right at home in a dinner theatre production of My Fair Lady. An unearthly ruckus from upstairs interrupts their girl talk. They find that the nursery has practically been demolished. Baby Nicholas lies quietly in his crib, a dolls decapitated head in his little arms. “He frightens me,” Lucy admits, “He’s been like that since he was born.”

In flashback we learn that Lucy used to be a nightclub dancer. With hilariously detailed narration, she recounts the beginnings of her woes. Her specialty was a number where she danced with a dwarf named Hercules. One night in her dressing room, her pint-sized dance partner pays her a visit. “I felt awkward,” she tells Mandy, “but I didn’t want to upset him, I knew how sensitive he was. I felt his hand on my neck. I tried to pretend it wasn’t happening. Maybe for an instant I was fascinated. It felt unreal.”

She rejects him and he is humiliated. As Lucy leaves the club, Hercules shouts his curse, “You will have a baby…a monster, an evil monster conceived inside your womb. As big as I am small and possessed by the devil himself!” It’s not weird, or scary, or creepy. It’s just one of the many moments in this supernatural thriller that elicit giggles instead of terrified screams.

When Sister Albana comes to visit the baby, she witnesses a violent feeding. “He spat at me!” Lucy cries, “He hates me!” In Albana’s presence, baby Nicholas shrieks and when placed in the arms of a priest at his christening, he goes into convulsions.

After employing the help of a full-time nurse, Gino and Lucy go out for a romantic evening. When they get home, they find the nurse was nearly drowned while giving the baby his bath. A little hand pulled her head into the bathwater. As Lucy puts the child to bed, it’s not the baby’s face that she sees, but the evil visage of Hercules!

While sharing a cup of tea with her friend, Lucy frets over her newborn, “How can I tell the doctor I think the baby is possessed by a devil?” Dr. Finch suggests some genetic tests to help determine what’s wrong with the baby. While the nurse is taking Nicholas for a stroll in the park, a tiny hand pushes her into the lake.

Albana discusses the problem child with her brother, “Lucy believes he is possessed…by the day-vil.” Unsure whether Lucy is imagining things or if something truly is wrong, she asks Gino, “When did you last pray?” Their whispered prayers elicit tortured screams from the baby upstairs.

The next day, Lucy steps out while the beleagured Mrs. Hyde finds a dead mouse in her cup of tea. Sister Albana consults with Dr. Finch in a laughably philosophical discussion of religion, science, and the supernatural. The doctor takes her theory of possession in stride and agrees to hospitalize the baby for observation while Gino takes Lucy on holiday.

Lucy goes to see her old employer. Tommy, the slimy strip club owner is played by John Steiner, who was also a memorable villain in the Italian films Yor, The Hunter From the Future (1983) and Sinbad of the Seven Seas (1989). While auditioning a group of forgettable dancers for his topless revue, Tommy invites Lucy to rejoin the troupe. “I was lousy most of the time.” she admits. It’s valid assessment considering the fact that she never stripped in her old act. The scene injects some hardcore T&A into what has so far been a PG state of affairs.

She explains that he might be the daddy of her devil child, “Just ’cause you’ve got some freaky offspring you wanna pin it on me. What’d you expect me to do, fire Hercules and put your kid in my show?” In a moment that foreshadows her future employment on Dynasty, she calls him a bastard and dramatically slaps him. This piques Tommy’s interest, “I wanna see this spooky baby of yours.”

At the apartment, when Tommy leans in close to see if there is a family resemblance, baby Nicholas gives him a bloody nose. This amuses Lucy and, for the first time, looks at her child with affection. That is, until the face of Hercules appears in the crib.

Gino comes home from the office with all the makings for a romantic evening with his wife. They finish off the night by making love in a scene filled with soft-core close-ups and saxophone accompaniment. When Gino checks on the baby and finds the nursery empty and the window open, he goes outside to investigate some eerie giggling. When he looks up into some braches, a noose slips around his neck and he is soon dangling from a tree. His body is disposed of in the storage cubicle underneath the patio.

Lucy searches London for her missing husband but cannot find Gino anywhere. That night the doctor pays a visit to check on the troublesome child and it’s frenzied mother. “I’m frightened to be in the same house with him,” Lucy admits. After giving her a sedative, Dr. Finch hears that same creepy laugh and goes to investigate. In the backyard he is decapitated with several whacks from a garden shovel.

In a doped up haze, Lucy stumbles through the house. Her nightmare becomes all too real when she is attacked by the possessive spirit of Hercules. “I’m your mother, you can’ hurt me!” she cries as she barricades her bedroom door against her child’s murderous attack. “I know why you hate me. You didn’t want to be born!” Lucy pleads, but it is no use and she is stabbed trough the heart.

In a final showdown, Albana confronts the devil child. Reading from an ancient text, she begins the exorcism while the infant screams and the crib shakes. Baby Nicholas tears at her vestments, but with crucifix in hand, she carries on. On the other side of London, Hercules doubles over in agony while performing onstage with the girls at the nightclub.

The child leaps from the crib as the nursery shakes. Repeating the sacred Latin text, Albana touches the cross to the baby’s forehead. Hercules stumbles and falters while the showgirls continue to dance around him. Apparently the show must go on, even if you’re a stripper. When Sister Albana is finished, Nicholas gurgles and coos like a happy baby while Hercules, that diminutive practitioner of black magic, drops dead in front of a stunned audience.

In conclusion: When you’re dealing with a murderous, possessed infant, there’s a very fine line between a story that is terrifying and a story that is terribly silly. The cast seems to be trying their best, but their efforts are wasted in the type of movie where a grown man is punched in the nose by a baby. If The Devil Within Her had a Z-grade budget and second rate actors it would have been an amusing piece of genre junk. What makes it truly exceptional is the fact that this appears to be a serious attempt at a suspenseful horror film.

Aside from its unintentional laughs, The Devil Within Her leaves many questions unanswered. Why does Joan Collins remain clothed during her strip routine only to (briefly) appear nude in a love scene later on? The beautiful Caroline Munro is best known for her shapely figure. Why cast her (in a part that’s inconsequential at best) if you’re not going to exploit those assets? Where exactly did Hercules get his powers? Is he evil or just a bitter little man? Is he the devil? Why did he die after the exorcism? How does a nun (who is a research scientist) know how to perform exorcisms?

With demonic dwarfs, possessed infants and some of the ugliest (but groovy) production design of the 1970’s, Joan Collins might feel that The Devil Within Her is better left forgotten. Fans of Cool Cinema Trash will consider it unforgettable.