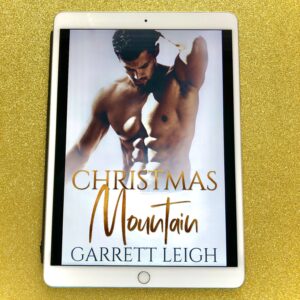 Fen and Rami once worked together at a prison – as guard and probation officer. The last person Fen ever expected to find broken down outside his house on snowy Christmas Mountain is his former co-worker with a toddler in tow. Rami explains he was headed up the mountain to his sister’s place, Fen’s closest neighbor. Little Charlie has recently become Rami’s responsibility, but he doesn’t feel he’s up to the task and is seeking the help of his far more capable sister Safia.

But because of the storm, it’s apparent that they’re not going anywhere anytime soon, and they settle in. Fen is a natural at parenting and is terrific with Charlie. The whole situation is so intimate and cozily domestic. The attraction Fen and Rami once shared, before life took them on separate paths, is still there. A near death injury Fen received while on the job, still haunts him and is the reason he retreated to his current life of solitude on the mountain, running his family’s tree farm.

The next morning Paddy, Safia’s husband, arrives in his truck to take Rami and Charlie up the mountain. They’ll stay for a while for some long over-due family time.

A few days later Fen drops by to find Rami knee deep in farm life, kids, animals, and constant general chaos. Fen thinks it suits him. Rami insists otherwise. They go into town for a date night so that Fen can check in on his tree lot that’s part of the Christmas fair. They eat donuts from one of the vendors and share a pint. Some flirting and a kiss at the local chip shop hopefully will lead to more. When they get back to Fen’s place, they make-out for hours before falling asleep in each other’s arms.

The next day, Paddy takes Rami deep into the woods to show him ‘the treehouse’, an office beautifully constructed by Fen’s dad. Inside is a powerful satellite router. Up to this point, Rami has insisted that his sister’s plan to have him and Charlie live on Christmas Mountain wasn’t feasible because the internet was so crappy. Here he is presented with the perfect solution, a remote office nestled amongst the trees.

Rami’s car has been repaired and Fen goes to the treehouse to deliver the good news. Rami has his own news to share. He’s spoken with his boss, and he’ll work remotely for a few weeks until after the holiday.

That night they go for a walk to a lookout point atop the mountain. Though he doesn’t label it, Fen is essentially demisexual and while he wants to be with Rami that way, it’s going to take some time to work through the storm of emotion inside of him. Rami wants Fen too and is willing to wait.

Rami needs to get some things from his place in Manchester, so Fen goes with him on a day trip. Fen hasn’t been back to the city since the day of the prison attack. They lay on Rami’s bed, in his sparsely furnished apartment, and Fen reveals the details of that horrible day. After telling the story, he feels different – unburdened. He kisses Rami and things heat up pretty fast, but this time he doesn’t want to stop, and they end up sleeping together.

When they return to the mountain, Rami achieves a work/life balance which, including Fen, is just about picture-perfect.

They round up the kids (giving Safia and Paddy a break) for an afternoon at the Christmas faire. Mae, Rami’s niece, is a holy terror when it’s her turn to sit on Santa’s lap. But she’s also perceptive beyond her years. In a quiet moment, she tells Fen she can see how much he loves Uncle Rama because he’s always smiling when they’re together. That night, after a rambunctious family dinner, she also suggests Fen and Rami have a sleep over, which is exactly what they end up doing. In the mini cabin Rami has been using as his room, they make love in front of the fire.

In the morning while making tea, Safia gives her brother some blunt advice. Tell Fen he loves him for fucks sake. Rami calls Fen, who is off on a holiday tree delivery, to say ‘I love you’, but bad weather means Fen won’t be back until the next morning. They can say it in person to each other then.

But a natural disaster leaves Rami and his family stranded atop Christmas Mountain. It takes most of the day, but Fen eventually makes his way back. Their love is a forever kind of love, and nothing will keep them apart. Fen will move in with Rami, Charlie, and the rest of his wild/wonderful family.

On Xmas eve, after Fen tells Charlie a story and tucks him into bed, Fen and Rami make love with a joyous intensity that is their very merry way of expressing the love that they’ll be sharing for the rest of their lives.

While I’m by no means an expert, in my experience, one of the things you can always count on when you pick up a Garrett Leigh book, is a heartfelt story filled with genuine emotion. Everything that Rami and Fen go through is so relatable. They’re average guys who find themselves in difficult circumstances with no easy answers, kind of like real life, which is why I think you’ll be rooting for them from page one just like me.

And when it comes to the romance in the story, if you’re angst avoidant like me, I think you’ll enjoy the way the heroes work through their issues (both past and present) without lots of maudlin wallowing. They are very active participants in their journey towards family togetherness, and a life filled with love. No one hands them their happily ever after, they work for it.

Christmas Mountain is a different kind of holiday romance. It forgoes the Christmas schmaltz (though you know I LOVE lots of gooey, sappy holiday cheer) for a more grounded, nuanced approach. It deals with complicated family and relationship dynamics while still delivering on the kind of satisfying romance that will make you sigh with satisfaction at the end.