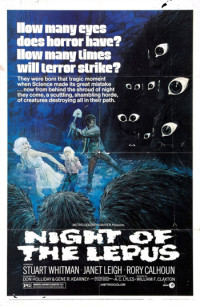 There was no limit to the horror… No end to the Night of the Lepus.

“Monsters on the loose” have been a staple of sci-fi horror movies since cinema practically began. During the atomic era of the 1950’s, drive-ins were inundated with countless mutated beasts in such films as Them! (1954) Tarantula (1955) and The Amazing Colossal Man (1957). The genre enjoyed a resurgence in the 1970’s, letting loose a whole new batch of critters hell-bent on revenge. Atomic radiation was no longer the mutanigenic culprit. Man’s careless abuse of the environment was to blame. One of the oddest of these eco-vengeance thrillers was Night of the Lepus (1972), in which a cast of familiar Hollywood faces must battle a warren of oversized bunny rabbits.

What it’s all about: Just in case the idea of giant killer rabbits was too high concept for the audience to grasp, there’s a faux news story at the beginning of Night of the Lepus. The alarmist tone of the report on rabbit overpopulation sets up the concepts that will be featured in the film. “Can this population explosion be contained?” the reporter rhetorically asks as we’re shown genuine newsreel footage combined with fictional scenes of the pesky varmints.

When the Arizona ranchland of Cole Hillman (Rory Calhoun) is overrun with rabbits, he calls his friend from the nearby university. Elgin Clark (DeForest Kelly) suggests they consult with a husband and wife research team about the problem. Roy and Gerry Bennett (Stuart Whitman and Janet Leigh) are busy collecting bat specimens when Elgin arrives and explains about Hillman’s rabbit explosion.

“Rabbit’s aren’t exactly Roy’s bag,” Gerry cautions. Nevertheless, Roy agrees to have a look at the problem. Hillman is reluctant to use poisons since they would harm the environment. Plus, it would mean taking his cattle off the range and selling them at the worst time of the year.

Roy suggests using hormones to alter the rabbits breeding cycle, thereby killing them off without effecting the cattle or the land. At their lab, the Bennett’s begin trials with an experimental serum. “If we could effect the blood of fifty rabbits,” Roy explains injecting a test subject, “It wouldn’t take long for this change to take place in the entire population.” They soon discover that the main side effect of their serum is rapid growth.

While her parents are busy with their experiments, annoyingly precocious Amanda (Melanie Fullerton) adopts one of the bunnies as a pet. It isn’t long before little Peter rabbit makes a break for it, escaping into the general rabbit population.

As the Bennett’s continue their experiments, Hillman sets a controlled blaze on his land in hope of starving out the fluffy critters. Young Jackie Hillman (Chris Morrell) wants to introduce Amanda to Capt. Billy, a nutty old prospector who lives in the hills. When they arrive at Capt. Billy’s camp, he’s nowhere to be found. Amanda checks the old mine and finds giant rabbits gnawing on what’s left of ole’ Capt. Billy. While a traumatized Amanda rests at the Hillman ranch, the local sheriff comes across the chewed up remains of a trucker who was overcome by the furry beasts.

Aside from the ridiculous killer bunny concept, the thing that makes Night of the Lepus so memorable is the use of live rabbits, the kind you would find in any local pet store. The filmmakers use quick cuts, close-ups, slow motion and just about every other cinematic trick to make the rabbits look as menacing and bloodthirsty as possible. Their efforts are pretty much in vain. We’re talking about bunnies here!

While the police try to figure out the recent string of attacks, the mutilated remains of a family of four are found. “Rabbits as big and ferocious as wolves?” Roy questions as the scientists theorize. “Assuming, inadvertently, we introduced defective cells into that one rabbit, it’s conceivable that we could have created the seeds for a mutated species.”

In the morning, everyone heads up to the old mine to see just how mutated the rabbits have become. Roy and Cole Hillman explore the mineshaft while the others set explosive charges at the entrance of the mine. They find the rabbits, take a few snapshots, and then beat a hasty retreat when the bunnies begin to stampede.

A stuntman in a rabbit costume tackles Hillman. Quick cuts and close-ups are used to disguise the preposterous nature of the life and death struggle. While Roy and Hillman try to escape, a ferocious rabbit attacks a ranch hand at the mouth of the cave. The stuntman bunny is intercut with footage of a real rabbit with red paint staining its buckteeth and paws. Gerry scares the beast away with her shotgun.

Once Roy and Hillman are clear of cave, they blow the charges, sealing the rabbits inside. Maybe someone should let these scientists know that bunnies like to burrow. Sure enough, under the cover of night, the rabbits dig themselves out and begin to rampage across the Arizona landscape.

Spooked by the presence of giant bunnies, Hillman’s horses break free of their corral and are quickly devoured by the rabbits. One of Hillman’s ranch hands tries to escape, but the main road is blocked by hundreds of fuzzy man-eating critters. They chomp on the poor guy while Hillman and the rest of his employees hide in the storm cellar.

Rabbits lazily lope across the astro turf covered model of the ranch. They break into the farmhouse and try to gnaw through the floorboards to get to their next meal. Unable to reach Hillman, the herd moves further on down the road and attacks the proprietress of the general store. A farmer is also attacked on his front porch. It should be said that some of the miniature work featured in Night of the Lepus is quite good. The scale and detail of these landscapes is excellent. The only problem is that there are bunnies hopping through them, which ruins any realism that the scale models hoped to achieve.

Come morning, Gerry and Amanda leave for safer territory, while Roy, Elgin and the sheriff take a chopper up to the mine where their worst fears are confirmed. There are signs that the rabbits dug their way out. Night falls and the rabbits are on the move again. Ominous music plays as the bunnies hop across the miniature landscape and leap over “gorges”. The sounds of galloping hooves are also added to make the cute critters seem like they’re on an unstoppable rampage.

The National Guard and local authorities evacuate the town that lies in the direct patch of the oncoming horde. Roy comes up with the idea to put “a fence between the rabbits and the city. An electric fence.” Using the railroad tracks outside of town, they hope to electrocute the bunnies.

A deputy heads to the local drive-in to make this classic announcement: “Attention, attention. There is a herd of killer rabbits headed this way.” The drive-in patrons are enlisted to help with the plan. Their cars are lined up and headlights turned on, in hopes that it will herd the rabbits toward the tracks.

Gerry and little Amanda never reach their destination. When their camper gets stuck in the dirt, Gerry must fend off the rabbits with roadside flares as her only weapons. Roy arrives in the chopper just in time.

The rabbits spook a herd of stock footage cattle before nearing the railroad tracks at the edge of town. The fluffy horde hops ever closer as the juice is switched on. ZAP! As the rabbits hop across the tracks, there’s a snap, crackle and pop as they’re electrified. After a few moments of sparkly special effects, the rotund rabbits are eliminated.

A quick epilogue shows that life has returned to normal as Amanda and Jackie frolic in the fields of the Hillman ranch. If you guessed that there would be a harmless little rabbit waiting in that field, you’d be right. If you also guessed that the camera would zoom in for a final freeze frame of the innocuous critter, then it’s obvious you’ve seen more than your fair share of eco-vengeance horror movies.

In conclusion: With its horde of man-eating bunnies (aren’t rabbits supposed to be vegan?) and straight-faced performances by an especially earnest cast, Night of the Lepus is a bad movie must see. The next time the major networks rerun King of Kings (1961) or The Ten Commandments (1956) during the Easter season, pop Night of the Lepus into the DVD player instead. 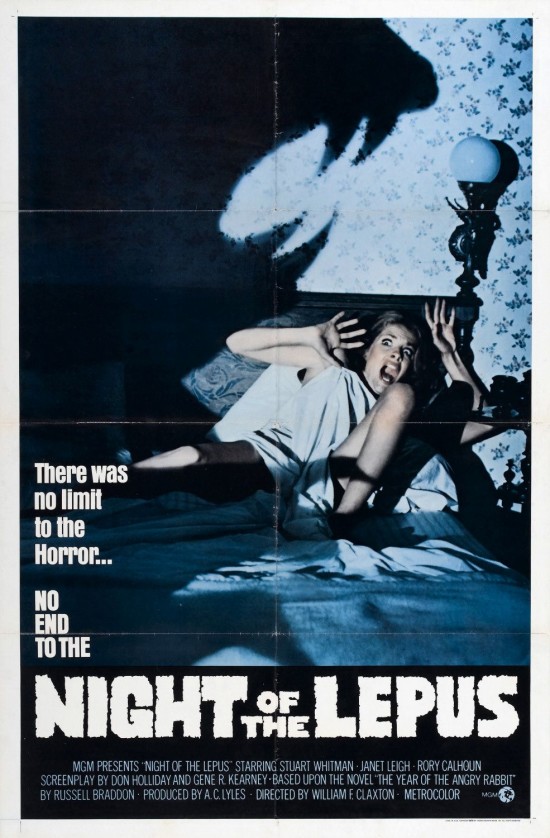