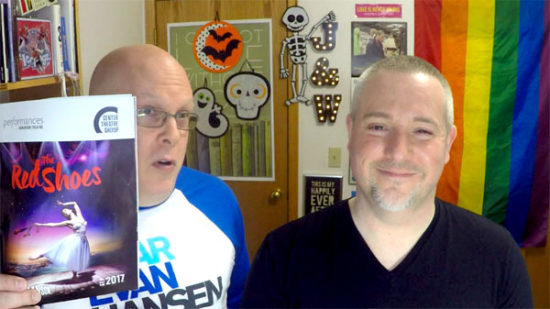 The charity anthology Changing on the Fly: The Second Period, which benefits the You Can Play project, releases on October 4. The anthology features four terrific new stories by Jeff, Heather Lire, V.L. Locey and RJ Scott.

We briefly recap our trip to Sacramento, where we’ll likely move in 2018.

We congratulate Derek & Romaine for winning Best LGBTQ Podcast in the 12th Annual People’s Choice Podcast Awards. Jeff and I also give a shout out to one of our new favorite podcasts, Talk of the Toon, which recaps Masters of the Universe episodes.

Christina from Christina Bookshelf stops by to talk about her recent focus on debut authors.

Jeff & Will review the Matthew Bourne production of The Red Shoes, which just wrapped up its U.S. premiere in Los Angeles.

Jeff talks to Author Marshall Thornton and voice artist Joel Leslie about their collaboration on the audiobook of Femme, Marshall’s 2016 novel that was nominated as Best Gay Romance at the Lambda Literary Awards. They also discuss what Marshall and Joel have coming up next.

All this and more can be found at BigGayFictionPodcast.com!