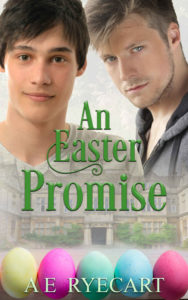 An Easter Promise by AE Ryecart

This is the continuing story of Rory and Jack, who we first met in the holiday story, A Kiss Before Christmas.

In that story, Jack finds the homeless Rory huddled on his doorstep and offers him a place to stay. As they learn more about one another, Jack asks Rory to pose as his fake boyfriend when he goes home for the holidays. An unexpectedly severe winter storm prevents them from that trip, but in the few days they’ve been together they’ve fallen in love.

I read A Kiss Before Christmas last year, and I still highly recommend it.

In An Easter Promise, it’s now Spring and our two heroes are finally making the trip to visit Jack’s family in his ancestral manor house in the countryside.

This is a particularly nerve-wracking experience for Rory, whose childhood couldn’t have been more different than Jack’s well-heeled upbringing.

Things go relatively well as Jack shows Rory around the expansive estate, but they then get frosty when Jack’s mom makes it clear that she believes that Rory is after her son’s money.

Gold-digging accusations aside, as a favor to her, Rory steps in as a last-minute contestant in the Best Bake competition at the village festival. Though his brownies were obviously the best, he doesn’t win.

Afterwards, Jack announces that he and his culinarily gifted boyfriend are going into business together and are opening a bakery.

This once again raises the suspicion that Rory is only after Jack for his money, causing a major rift in family relations.

Jack tells his mom where she can stick her suspicions, and is ready to return to London, but when Rory takes the family dog for a walk, he gets lost on the moors in a sudden storm. If reading fiction set in the U.K. has taught me anything, it’s that going for a walk on the moors is always a bad idea.

The family organizes a search party and journeys into the dark night to find Rory. He is eventually found, and Jack makes amends with his parents.

Flash forward a few months to the opening of the bakery and the beginning of a new chapter for our romantic heroes.

I really like both of the stories featuring Rory and Jack and sincerely hope that this isn’t the last that we’ll see of them. The opening of the bakery certainly presents several new story possibilities.

A.E. Ryecart, if you’re reading this, I’m a fan and a continuing series set in this world would be greatly appreciated.

This review originally appeared in episode 186 of the Big Gay Fiction Podcast.