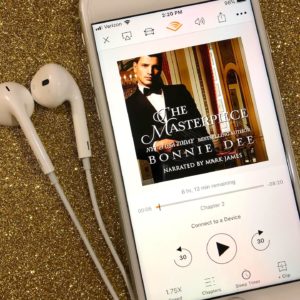 The Masterpiece by Bonnie Dee

‘The Masterpiece’ by Bonnie Dee is a makeover story with Pygmalion themes in a historical setting. Essentially, an irresistible gay version of ‘My Fair Lady’.

The story centers on a guy named Arthur. He is the well-to-do gentleman in this particular scenario and, one day, he’s out enjoying the good life with his bestie, a guy named Granville. Occasionally Arthur calls Granville, “Granny” and it totally cracked me up.

Granville believes very heavily in the British class system. Arthur is a little more modern in views. He feels that if a man has the wherewithal and can pull himself up by his bootstraps, he can achieve anything with his life, no matter where he was born on the ladder of social hierarchy.

In order to prove their different theories, they set a wager, and that bet involves Joe the shoeshine boy. Arthur must make Joe a gentleman in six weeks. It is there that he will make his debut at the biggest party of the social season.

Joe moves in with Arthur who is very glad to realize that Joe is not only very smart and very kind, he is hardworking and interested in bettering himself. Joe is undertaking this particular makeover because he has dreams of owning his own men’s shop one day – with a focus on finely crafted shoes.

They get down to work and, after spending several days studying and learning which fork to use, they decide to get some fresh air. So they go for a constitutional in the park where they unfortunately run into Granville, who’s like escorting some demure young ladies. Joe does very in his first unexpected like test.

Arthur and Joe now realize that they have definite feelings for one another. Their next test comes during an evening at the theater where they unfortunately run into Granville yet again (this dude’s everywhere).

Granville has befriended a professor of linguistics, and Arthur knows that Granville is only befriending this schlub because he plans on bringing the linguist to the party to expose Joe as some sort of lower-class fraud. Joe handles the situation admirably.

He’s proving himself time and time again, but Granny is not going to give up. He makes sure that Arthur’s family is invited to the big soiree, and his family comes to stay, making it nearly impossinle to have any alone time with Joe.

Finally, the big evening arrives and everything goes swimmingly. Joe is tested but everyone is really charmed and quite taken by him.

When it comes to Pygmalion stories there is usually a point in the narrative where the Eliza Doolittle character has to wonder if the professor is in love with her, or the person that she’s pretending to be. We kind of skip over that in this particular story because it’s really obvious that Arthur and Joe are like completely into one another.

What ends up happening is that Joe feels guilty, his conscious getting the better of him. All these lords and ladies and debutantes are remarkably kind to him, and he feels genuinely bad that he’s pulling the wool over their eyes. That guilt eventually leads him to leaving Arthur’s house sooner, rather than later.

Arthur and Joe try to figure out how can they make their relationship work, but they can’t. Even though they’ve essentially won the bet and they’ve proven their point, the fact is that the class system is still very much a thing and the two of them are from two different worlds.

Joe packs his bags and leaves and Arthur ends up going to India. He has been convinced by his brother and his father that he has to finally grow up and take part in the family business. While he’s away, Joe uses the money that he earns from the bet and opens his own shop.

When Arthur finally arrives back in England, there’s a big declaration of love scene because they realize they are both utterly and completely miserable without one another. And they both vow to find some way that they’re going to make it work.

I really, really loved this book a lot.

I loved these two characters that Bonnie Dee created I was rooting for them the entire time.

This review originally appeared in episode 198 of the Big Gay Fiction Podcast.