Quick Review: The Secretary and the Ghost by Gillian St. Kevern 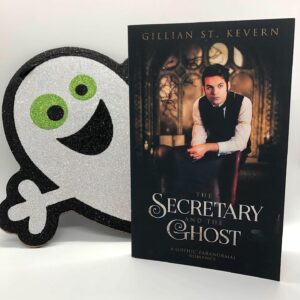 The Secretary and the Ghost by Gillian St. Kevern

Like the beginning of any good gothic romance, young and innocent Phillip (who everyone calls Pip) makes the pilgrimage to foreboding Foxwood Court. To pay off the family debt, he’ll work as secretary for the handsome, but stern Lord Cross.

Putting Cross’ papers in order is a chore, but Pip is up to the task. The simmering tension between employer and employee comes to a boiling point when Cross passionately kisses Phillip… something the young man finds that he very much enjoys.

One day, in one of Foxwood’s many parlors, Pip comes across a portrait, to which he bears a striking resemblance. He carefully questions Surplis the butler and learns that the painting is of Joseph Leighton (Pip’s distant relative) who took his own life and is said to haunt the halls of Foxwood. Any sighting results in tragedy.

Late one evening there is a commotion in the study. His lordship has been attacked and members of the staff witnessed Pip as the culprit, but since he was upstairs talking with Surplis, it could only have been the ghost of Foxwood.

Cross explains to Pip that, after getting conked on the head, the intruder was most definitely NOT a ghost. In a quiet moment together, Cross doesn’t necessarily declare his undying devotion (that would be far too improper) but he lets it be known that he definitely returns Pip’s affection. He invites Phillip into his bed, and they share a passionate night together. But the next morning Cross has gone cold, insisting that it can never happen again, saying that, “the love of a Cross is always forbidden and inevitably fatal.”

Cross’ frustrating sense of duty as they pertain to his feelings for Pip, are something I’ll come back to in a minute.

Under false pretenses, an interloper arrives at Foxwood. It’s Phillip’s uncle Andrew, the scoundrel who plunged Pip’s family into financial ruin. Cross makes it clear that he has plans for uncle Andrew and if Phillip interferes with his wishes, then he will no longer have a place at Foxwood.

As Pip prepares to leave, he encounters the cold ghostly apparition of Joseph Leighton. But instead of a harbinger of doom, he believes the ghost is a sign. There must be a method to Cross’ madness, so Pip stays to keep an eye on scheming uncle Andrew. Once his plan is revealed, a meeting is set in the neglected orchard on the estate grounds. It seems Pip was right, the ghost of Joseph Leighton is indeed benevolent, saving Pip and handily doing away with evil uncle Andrew.

The good name of Phillip’s family is restored, leaving Pip and Cross to plan their future happiness together.

The Secretary and the Ghost has just about everything you could ever ask for in a gothic romance – there’s mystery, intrigue, a ghost, duplicitous relatives with nefarious motives, a gloomy manor house, filled with dark passages and things that go bump in the night. And most important of all, a brooding alpha male hero who is just as frustrating as he is swoon worthy. Cross runs hot and cold, leaving poor Phillip both confused and turned on, in equal measure.

At one point in the story, while sorting through his employers/lovers personal letters, Pip realizes that for someone with such a prickly demeanor, Cross corresponds with a wide variety of people on any number of subjects. It’s then that Phillip understands that Cross presents a certain image that belies his true nature.

I like to think of this as the “Darcy conundrum”. Just like Darcy in Pride & Prejudice, Cross is so duty bound and frustratingly proper, that he often comes off like an unrepentant asshole. In reality, he cares deeply about the people around him (Phillip included). Cross isn’t demonstrative, he lets his actions speak for him. Phillip eventually learns (along with the reader) that Cross has been working behind the scenes all along, to resolve Pip’s financial problems. He shows his love by taking care of people.

And speaking of love, I loved pretty much loved everything about The Secretary and the Ghost. It pays homage to the tropes of the gothic romances of the past, while giving things a modern, and very gay, twist. It’s romantic and sexy. It’s spooky, without being scary.

While I read it to coincide with Halloween, this story, and the rest of the series, can be enjoyed anytime of the year.