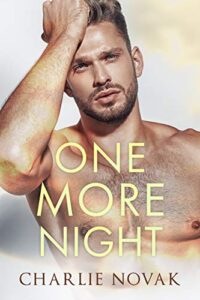 One More Night by Charlie Novak

Jack isn’t thrilled when Harry walks back into his pub. The fact is, Jack is crazy about the guy, but they have a long history on again/off again hookups that they justify as just “one more night”.

Against his better judgement, Jack agrees to go to dinner with Harry where he explains he’s in a bit of a bind. His family expect him to bring a boyfriend to his sister’s wedding, and he’s given them the impression that Jack is that boyfriend.

Harry’s relatives are snobby insufferable trash. But Harry’s a great guy, so Jack agrees to attend. They drive to the charming country B&B that most of the wedding party is staying at.

Harry’s mom is apoplectic when he shows up with Jack – how can he spend time with someone so low-class?

Actually, it’s the time he’s spent with Jack in the lead up to the wedding that makes him realize what he really wants out of life. Harry tells his family that he wants Jack, and if they have a problem with that, then they can fuck off.

Harry and Jack are finally able to admit how deeply they’ve fallen for one another and, after a passion filled night, they know that it won’t just be one more night… but every night, forever.

I loved the chemistry between Jack and Harry. There’s lots of great banter and humor between them, you can really sense the history they have together.