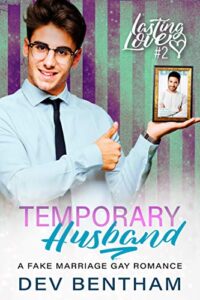 Matt is up for a big promotion at his job. The only problem is that in order to ‘fit in’ at this conservative firm, he’s had to create a fake husband, a guy named Ben. The reason he’s gone to all this trouble is because he’s still a very young guy and he wants to give the impression that he is, you know, stable and hardworking.

And what better way to do that then come up with a fake husband? The only problem is, the promotion is going to hinge on introducing everyone to said husband at a corporate retreat.

He needs to find himself a husband, quick.

That husband is going to end up being male model Tony who’s been in the modeling game for quite a while now. He’s thinking about the next steps he wants to take in his life. Primarily, he’s studying to become an EMT, so he agrees to this tropical vacation and pretend to be a fake husband because during his downtime, he’ll be able to study for his exam.

But of course, with all fake relationship stories, things do not go according to plan. When Matt and Tony arrive in paradise, they realize this isn’t a corporate retreat, it’s just Tony, Matt, his boss, and his wife and the other guy who is up for the promotion.

The next few days are essentially going to be a one-on-one test to see who’s going to get the job.

Forcing Matt to play nice and play golf, which he doesn’t know how to do, and forcing Tony to spend time with the gals, shopping with the wives and spa appointments. It’s during these trials and tribulations that they get to know one another and realize that their fake relationship may not be so fake after all.

Tony wants to know if this promotion is actually worth it, because the people that they’re spending time with are genuinely awful. Matt assures him that it is, but Tony isn’t so sure.

Tony’s cover is eventually blown, but he saves the day using his EMT training when the boss has an unexpected health emergency, but even then, it’s obvious to Tony that all of the pain and suffering that they’ve been going through isn’t worth the eventual prize, which splits our happy couple up.

Eventually Matt comes to his senses and realizes Tony is the one worth fighting for.

Temporary Husband by Dev Bentham is a classic fake relationship story. I love this trope so much. These kinds of stories are my happy place.

I think what the author does in this particular novella is she hits the proverbial trope on the head, and gets everything right, plus she’s come up with two genuinely likable and kind heroes – Matt and Tony, which is also something I can never get enough of, nice guys falling in love.

This feel-good story ticked all of the boxes for me.