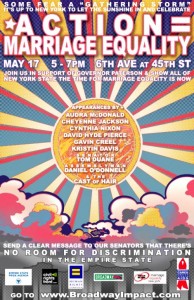 Back in November, after California voted down Prop 8, Will and I attended our first protest. We marched through the streets of the Upper West Side and supported our friends and family in California who had their rights stripped from them by a bunch of mean spirited voters.

Now the marriage fight is in our backyard. The New York State Assembly passed a bill to legalize same-sex marriage in the state on May 12. The bill faces a battle in the state senate, where democrats have a very slim majority. If the bill doesn’t come to a vote by the time the legislative session ends on June 20, it will die and the battle has to start over again in the fall.

Upstart organization Broadway Impact (founded by Hair Tony Nominee Gavin Creel, Broadway company manager Jenny Kanelo and actor Rory O’Malley) is a community of actors, directors, stage managers, fans, producers — pretty much anyone who has ever seen, been in or worked on a Broadway show — united by the simple belief that anyone who wants to should be able to get married. They decided there needed to be a rally 10 days ago and with the help of Broadway Cares/Equity Fights AIDS, Human Rights Campaign, Empire State Pride Agenda, Marriage Equality New York and other organizations they pulled it off.

Word was that the rally’s crowd extended six blocks from the stage at Sixth Avenue & 45th Street. It wasn’t just about actors performing either. During the two hours, it was politicians told us what we must do to have the Senate take action. Senator Tom Duane, who introduced the bill in the Senate, introduced the crowd to his husband-to-be as he told us what we must do to get the Senate’s attention. New York governor David Patterson spoke about how fundamental this right is. Mayor Michael Bloomberg and New York City Council speaker Christine Quinn also spoke. Quinn said she’s going to Albany on Tuesday to meet with senators who don’t support the bill so they can tell her to her face why they think she’s not the same as they are. Go Christine!

The moving stories of the day though were from people whose lives are impacted by the lack of marriage equality. There were two dads (with possibly the cutest baby ever) who were concerned about their son growing up not thinking his family was the same as everyone else’s. Sex and the City’s Cynthia Nixon spoke (while her co-star, Kristen Davis stood by in support) of her concern that if she were to drop dead tomorrow that her partner had no legal rights over their children. Frasier’s David Hyde Pierce spoke of the anger he felt that his California marriage had been taken away by voters and that New York can’t let that happen. Speaker after speaker came across the stage to say why equality was important and why we must fight to get the 1,300+ rights that straight married people are allowed.

Here are some highlights from the rally. This first clip is a highlight reel with some of the music and speeches from the afternoon (and I have to say I’m honored that Towleroad used this video in its writeup on the rally).

And, of course, since I love a good Broadway tune… here are the full musical performances starting with the cast of Hair performing “Aquarius” and “The Flesh Failures / Let the Sun Shine In.”

Xanadu’s Cheyenne Jackson with “If I Can Dream.”

Audra McDonald closed the rally with a personal story about why marriage equality is important for her and then she sang “Some Days.”

There was an anti-rally earlier yesterday put together by The New York Hispanic Clergy Organization, led by Senator Rubén Díaz Sr. In his speech, Senator Díaz said this: “We’re here to say to the governor: Mr. Governor, look at the people that are here, these are the people who say we don’t believe in marriage between a man and a man and a woman and a woman,”

Meanwhile, at the evening rally, Ana Ortiz (who plays Hilda on Ugly Betty) stepped to the mic and said that Senator Díaz doesn’t not speak for all Latinos. Ortiz wants her soon-to-be-born daughter to live in a state where she can marry whoever she wants.

The clergy needs to back away. We’ve got this thing called separation of church and state that they need to respect. I’m certainly not going to go to a church that doesn’t support me to get married. If I want to get married in a church, I can do that today. There are plenty of clergy who embrace gay marriage (a number of them were on the stage at the Marriage Equality rally). What we need are the legal rights… legal rights that are civilly granted and not a part of any religious organization.

Now I need to write to my state senator, Democrat Daniel Squadron (who is  a supporter of the bill), and let him know that I hope he works hard to persuade his senate colleagues to vote yes. If you live in New York state, go on over to Broadway Impact and they can tell you how to let your state senator know that you support same-sex marriage for New York State.