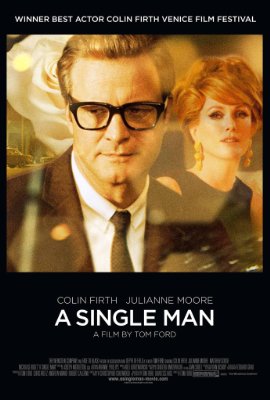 Tom Ford, best known as a designer and creative director for Gucci and then his own brand, branched into feature films as a director and co-screenwriter for A Single Man. The film, based on the 1964 novel by Christopher Isherwood, follows a day in the life of college professor George Falconer. George has lived in a haze the past eight months since his lover of 16 years was killed in a car accident.

Since this is 1962, George hasn’t been able to properly grief his loss. His lover’s family denied him coming to the funeral and only one other person seems to know the relationship George and Jim shared. As we go through this day with George it is clear he plans on committing suicide at the end of the day because he cannot go on any longer. I’m not going to spoil where the plot goes so you’ll have to see this excellent film for yourself.

Colin Firth delivers the performance of his career as George. I’m a big fan of Firth’s and this is a major departure in roles for him. He’s best known for his comedic turns in films like Mamma Mia, the Bridget Jones films and Love Actually or his period films like Pride and Prejudice and The Importance of Being Earnest. Here he’s still got his dry wit, but he is a very tortured soul and he plays it very well. He erases all those other roles and strikes out on a new path with this portrayal. Firth has already won a number of festival and critics choice awards for this role and is nominated for a Golden Globe. An Oscar nomination seems a good bet too.

There’s a great supporting cast in place as well. Julianne Moore plays the friend who knows the extent of George and Jim’s relationship. She’s a drunken divorcee here and, at times, it’s like she’s channeling Joanna Lumley from AbFab. It’s a good counterpoint to Firth’s grieving character. Moore is also Golden Globe nominated for her work here. Nicholas Hoult, who I became a fan of in the BBC series Skins, is a young man who is in George’s English class and has an interest in his teacher outside the classroom as well. Their relationship in the last fourth of the film is quite something. Hoult continues to be impressive with his choice of roles that expand his range (he’ll turn up next in the remake of Clash of the Titans due out later this year).

Tom Ford does a solid job with the direction. As you would expect, the film has great visual style with all the characteristics of the early 60s capture perfectly. I particularly liked the color work in the film with George’s point of view being a lot of grays, with occasionally bits of color when he is momentarily pulled out of his funk. I suspect the next time I see the film I’ll be watching the color shifts more closely.

I haven’t read Isherwood’s novel, but I intend to pick it up. Something to keep an eye out for is Isherwood’s husband, Don Bachardy, who crops up in an early scene as someone who says “good morning” to George when he arrives on campus for work.  Bachardy also served as a consultant on the film. If you haven’t seen the excellent documentary Chris & Don: A Love Story, it would make a good companion to this film.

It’s a sad commentary on how little times have changed that, even in 2010, there are parents who would try to do what Jim’s parents did in keeping George away from the funeral. Or that Jim and George would feel the need, depending on where they lived, to completely hide their relationship from friends. It’s really too bad that A Single Man isn’t 100% a period piece of the 60s.