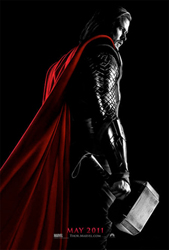 We haven’t been to the movies since we went to the documentary Making the Boys back in early March (and before that our last big studio release was The Eagle in early February). Thankfully our return to the multiplex was a good one. Thor was a thoroughly good time. It’s a superhero movie with heart and soul, worthy of some of Marvel’s best like Iron Man, Spider-Man and the first two X-Men movies.

I’ve been a fan of Thor since I was a kid. I enjoyed watching the cartoons when I was a kid. What wasn’t to like about the God of Thunder. He’s always been kind of a back-seat hero though, never getting as much attention as some of the other’s in the Marvel and DC universes. It’s great to see him get such an awesome big screen debut.

The story is Thor’s origins–how he’s on the verge of becoming king but then shows in a a big way that he’s not ready yet. He ends up cast out leaving his devious brother to become king and really make a mess of things. Meanwhile, Thor learns a thing or two about making the right choices while on Earth.

Chris Hemsworth, who was brought to everyone’s attention when he played  Jim Kirk’s father in J.J. Abrams Star Trek reboot, is very good as Thor. He’s sexy, confident, arrogant but also, eventually, venerable, responsible and ultimately kingly. He owns the role as well as Robert Downey Jr. owns Tony Stark. Natalie Portman is also well cast as the Earth woman who helps Thor while he’s here. There’s a good chemistry between these two and it’s too bad it couldn’t be explored more . Hopefully it will be in future movies.

Was the 3D necessary, probably not. I think this would’ve been just as good without the added expense of 3D. Overall the effects for the planetary travel and the battles were very good. The one downfall is the big battle to save everything is quite similar to Tron Legacy. Thankfully the writing in Thor is much better so the similarities are forgivable.

The Avengers seems to be coming together nicely for its 2012 debut. Iron Man and Thor we’ve seen already. They may eventually get Hulk right in that movie. In a couple months we’ll finally see if Captain America is going to fly. Based on the trailer I saw before Thor I think that will also be a good superhero film.