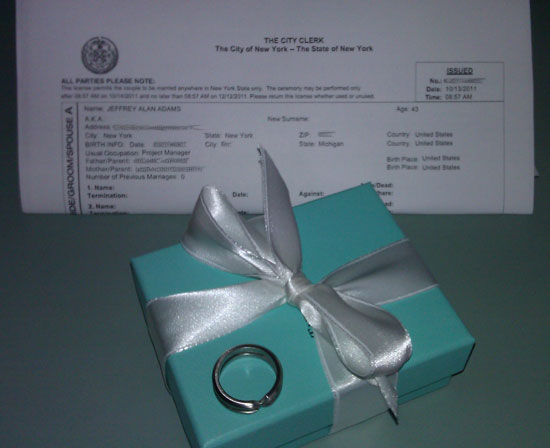 Yup, we’re getting legal! Back at the end of July the State of New York’s same-sex marriage law went into effect. While we didn’t jump on the “get married” bandwagon right away, we did know it was in our future. For a while we were looking at doing it September 7, 2012 on the 15th anniversary of our commitment ceremony. But, for a number of reasons, we decided now is the time. So…over the past few days…we’ve been laying the ground work.

The past Monday we bought new rings. We’d been toying with the idea of new rings for a couple years and this seemed the perfect occasion to take that plunge. As you can tell by the pretty blue box, we got them at Tiffany’s. Despite living in the city for over a decade, we’ve never been inside the store. It’s very sparkly! We’d done some pre-shopping on their website and once we were in the store we confirmed that we loved the Paloma Picasso Zellige ring. You can see it in the picture above, or you can get the more closeup view on Tiffany’s website.

This morning we went to the City Clerk’s office and got our marriage license. We did the online part of the paperwork earlier in the week and today we went and did the stuff you have to do in person. Being there and getting this paperwork was more emotional than I thought it would be. In our hearts, Will and I have been married since ’97, but there was something about getting the paperwork in order to make this a legally recognized union that gave me goosebumps. There was a great mix of people there this morning–there were gay couples, lesbian couples, straight couples. It was awesome! Hopefully one day soon marriage offices around the country will have the same mix we saw this morning.

Part 2 of this journey is next Wednesday morning. One of our very best friends, Mike, will be in town and he’s going to stand with us as our witness. After that, it’ll be off for wedding pancakes. Of course, there’ll be pictures posted later in the day.