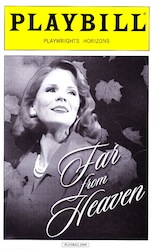 Yesterday, we went to the fifth preview performance of the new musical Far From Heaven, which is based on the 2002 film of the same name. Between the good buzz the production had following its preview run at the Williamstown Theatre Festival last summer and its creative team–composer Scott Frankel, lyricist Michael Korie (both collaborated on Grey Gardens) and book writer Richard Greenberg (who has a number of great plays to his name, including Take Me Out) as well as director Michael Greif (Rent, Giant, Angels in America)–I figured we were in for something magical.

The plot follows the film closely. Cathy and Frank live an idyllic life in Hartford, Connecticut in 1957. However, the fall brings changes for them both as Frank can no longer fight his attraction to men and Cathy finds herself attracted to Raymond, the family’s black gardener. 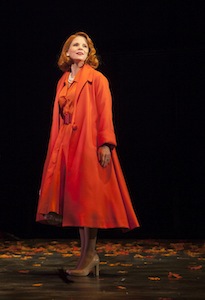 Kelli O’Hara is perfect as Cathy. Her journey from happy housewife to the shock of finding out about her husband’s troubles, which starts with her having to pick him up from the police station because of a “loitering” charge, and on to finding out how hateful people can be because of an initially harmless friendship with a “negro.” is spot on. And, it’s no surprise that O’Hara wraps her voice around the music beautifully and her performance is heartbreaking.

Steven Pasquale was tortured as Frank. He knows what he’s doing his considered wrong for the time. He knows it’s hurting his wife, but that doesn’t stop him from lashing out either. Isaiah Johnson was perfect as Raymond. He wants to be able to have the friendship with Cathy, and possibly more. Unfortunately, reality crashes in and he realizes that it’s not possible. 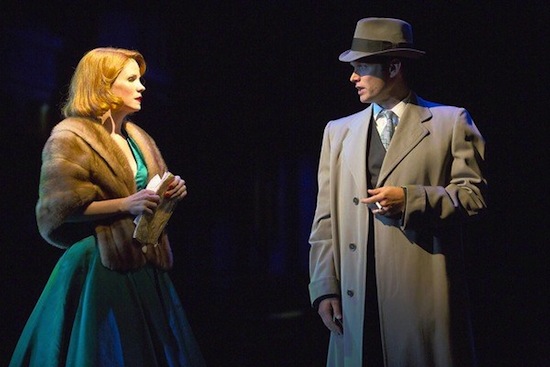 The show is good, although it hasn’t hit greatness (or become magical) quite yet. Unlike Grey Gardens, which took its documentary source material and expanded on it, Far From Heaven plays out like the film with the addition of some songs. Granted, I haven’t seen the film in a few years, but it doesn’t seem like anything has been expanded or altered too much from the source. It feels like a missed opportunity to not further explore the characters and issues presented in the story.

We attended a post-show discussion yesterday with Frankel, Korie and Greif and an extended discussion happened over the ending of the show. They aren’t happy with it yet, and some members of the audience agreed. The trio said that some new material was going into the show this coming Tuesday (meaning tomorrow) and that they were still tinkering ahead of Far From Heaven‘s June 2 opening night.

There are some wonderful songs in the show. “Marital Bliss,” which features the wives singing about how much they enjoy sex with their husbands is wonderfully comical but also a little sad since Cathy isn’t getting that with her husband. “Miro,” between Frank and Cathy as they attend an art show was delightful. “The Only One,” which plays between Raymond and Cathy, presents the sad reality of race in 1957 Hartford. “Wandering Eyes” was a perfect song to play while Frank his dancing with his wife but also flirting with another man at a Miami club.

It will be interesting to see the reviews of Far From Heaven once it opens. Hopefully it can move from the “good” show it currently is to a “great” show.