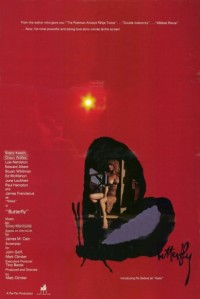 From the author who gave you “The Postman Always Rings Twice”, “Double Indemnity”, “Mildred Pierce”. Now, his most powerful and daring love story comes to the screen!

Honest and hard-working Jess Tyler (Stacy Keach) arrives home one blistering afternoon to find a pouty sexpot (Pia Zadora) sitting on the front porch of his modest desert shack. “Something you want?” he asks.

And we’re off and running on the sexed-up rollercoaster ride that is Butterfly (1982) the neo-noir melodrama based on the James M. Cain novel.

What it’s all about: The ‘purty young thing follows Jess around as he goes about his daily chores.

“Don’t it get lonely out here?” the mystery gal asks, “Or is milkin’ that cow good enough for you?” After taking a sip of fresh cream, she licks her lips and purrs, “I like it warm with foam on it.”

With the shameless flirtation out of the way, she finally reveals that she’s Kady… his daughter. “You didn’t think I’d still be a little girl did ya?” No siree, Kady’s all growed up, that much is for certain. She has more news. Jess is a grandfather. After having her baby out of wedlock, she escaped the judgmental stares of her hometown and headed to the desert to reunite with her estranged father.

That night, with a jerry-rigged sheet as a room divider, Jess takes more than a fatherly interest in Kady’s shapely silhouette as she undresses for bed. The next morning he finds her outside near the entrance of the old silver mine, the mine that its Jess’s job to protect. It soon becomes apparent that a family reunion isn’t the only reason for Kady’s visit.

“Is there enough silver in there to make one, maybe two, people rich?” When Jess tells her that indeed there is, she asks the inevitable, “What’s to stop us from tryin’ to get it out?”

Jess won’t even consider her plan until she reveals that the father of her child is Wash Gillespie, the son of the man who owns the mine. “They owe me and my baby! If I take that silver, that’s payment and that’s right and that’s good.”

With all the sincerity of a high school drama student reciting Scarlet O’Hara’s ‘I’ll never go hungry again’ speech, Zadora launches into Kady’s sad tale of growing up in her mother’s boarding house. It may be the best bad movie monologue ever.

“Jess, the first time I ever had a paper dollar bill in my hand I was twelve years old. I let one of the boarders spend the night with me. Maybe that was bad, but the things I bought with that money was good, and I want more for me and my baby. I want good things for him, and if that’s bad… then I wanna be bad!”

Jess’s answer? He drags her to church.

As you might expect, it doesn’t go particularly well when fire and brimstone preacher Stuart Whitman directs his lust and fornication sermon directly towards Kady. She flees and the preacher rather untactfully reminds Jess, “You can only be a daddy to her, nothin’ more.”

Kady arrives home the next morning as unrepentant as ever. At the mere mention of her leaving, Jess agrees to her plan and they head to the mine. After a day of pounding hard rock, Jess prepares a soaking tub for Kady. “Is it gonna be like this everyday?” she asks as she strips down and steps into the water, giving her daddy an eyeful, “Hurtin’ all over and not a thing to show for it? My shoulders feel like somebody’s been mining them.”

She requests a backrub and Jess willingly complies. When things start to heat up, Jess hesitates. “It’s all right if it’s good,” Kady tells him, repeating a mantra that seems to be her answer for just about everything.

“But you’re my daughter Kady.”

Much to her dismay, Jess pulls his hand from the soapy water.

They continue to work the mine and find enough silver fragments for a celebratory trip into town. Jess leaves her to do some shopping and comes back later to find her at the local roadhouse in the arms of a randy cowboy. When she decides to leave with not one, but two local boys, Jess does everything he can to protect what little honor Kady has left.

After the ensuing bar fight, Jess and Kady must stand before the local judge on charges of disturbing the peace. Judge Rauch (Orson Wells) takes a shine to jailbait Kady and has her approach the bench for a closer inspection. With a nominal fine and the threat of reform school, Kady and Jess return to the solitude of their desert shack only to find a family reunion (of sorts) in progress.

Kady’s sister has brought Kady’s infant son Danny for a visit. Her baby’s daddy soon comes a callin’ too. Wash Gillespie (Edward Albert) doesn’t have much backbone, but he is awfully rich. Kady plays hard to get at first (“I got one baby suckin’ on me, I don’t need another.”) but quickly accepts his marriage proposal.

Things are going real good until Jess’s tubercular ex-wife Belle (Lois Nettleton) shows up with the man who stole her from Jess years before, Moke Blue (James Franciscus). Nettleton hacks and wheezes with all the subtlety of a silent movie queen and soon takes to her sick bed. As her last dying act she tries to kill Moke with a hatpin, but he’s a slippery snake and escapes with only a flesh wound.

As Belle is laid to rest, Moke’s motives for returning to the desert become clear. Jess finds him toiling in the mine, searching for what’s left of the silver. Jess notices that Moke has a butterfly shaped birthmark that is identical to one that little Danny has. Jess jumps to the conclusion that Moke must have fathered Kady’s baby and blasts him with a shotgun. With his dying breath Moke reveals the truth. Danny has his hereditary birthmark because he’s Moke’s grandson. Kady isn’t Jess’s daughter, she’s Moke’s. Jess drags his rival deep into the mine and leaves him to die.

With the latest information about his complicated family tree, Jess goes into town to visit Wash and his parents (Ed McMahon and June Lockhart). Since he wants her all to himself, Jess lies, telling Wash that Danny’s birthmark is proof that the child belongs to Moke Blue.

Left at the proverbial alter, Kady doesn’t waste any time moping, “I don’t want nothin’ from the Gillespie’s but what I came here for in the first place… the silver.”

Jess is ready to give her everything she wants and more. They can barely keep their hands off of one another as the race up the mountain to the entrance of the mine and finally consummate their desire. Remember, Kady still believes that Jess is her father. She boinks him anyway.

A meddlesome mine scavenger witnesses their copulation and it isn’t long before they’re arrested for incest. At their hearing, Jess asks the judge what would happen if he pleaded guilty. The garrulous judge tells him that he’d immediately go to prison, “save the taxpayers the money and me the time, trouble and spiritual disgust.”

“Then I’m guilty and I forced her,” he declares.

Before he’s carted off to jail, Kady wants her say. “He didn’t do anything to me that I didn’t want to happen.”

On the stand, she tells her tale. “What we did was bound to happen from the first day we met… and when it did… it was good for both of us.” It seems doubtful that testimony of mutual orgasm will get them off the hook, but you can’t blame a gal for trying.

With the threat of jail time for him and reform school for her, Jess finally reveals that they are not father and daughter. Danny’s birthmark is offered as evidence of Kady’s true lineage. The judge asks why he didn’t save everyone the trouble and just tell her in the first place. “Because she never really had a father,” is his wacky explanation.

“I wanted to be everything I could to you,” Jess tells her, “because I love you.”

The case is dismissed.

“You’ll always be my daddy. Always.” Kady tells him on the steps of the courthouse. The wayward lovers sadly part. Kady leaves with Wash, presumably for a less complicated and melodramatic life, and Jess returns to the solitary desert life he once knew.

In conclusion: They say that money can’t buy you love, but apparently, it can buy you a Golden Globe Award. Business mogul Meshulam Riklis, who was Mr. Pia Zadora at the time, not only financed Butterfly, but also paid for the pricy ad campaign that would win his wife the Golden Globe for “Best New Star of the Year”. New star is a bit of a stretch. Though her on screen billing in Butterfly reads: Presenting Pia Zadora as Kady, Zadora made her actual film debut decades earlier in the low-budget Christmas classic, Santa Claus Conquers the Martians (1964). The same year that Zadora won her Golden Globe for Butterfly, she also received the dubious honor of two Razzie Awards, one for Worst Actress and one for Worst New Star.

Sadly, Zadora’s film career would quickly befall the “three strikes” rule. After Butterfly, two more flops followed, Fake-Out (aka Nevada Heat, 1982) and The Lonely Lady (1983). Her career seemed dead. But you can’t keep a good Pia down for long. Zadora found success within the music industry, earning a Grammy nomination in 1984 and singing with Jermaine Jackson on the hit single, “When the Rain Begins to Fall”. She’d later go on to a successful stint in Vegas, opening for Tony Bennett and Frank Sinatra.

The picture and sound quality of the DVD release is quite good, though it should be noted that the grainy/soft-focus look of the film has to more to do with the style in which Butterfly was shot and less with the quality of the DVD. Extras include a trailer, audio commentary by the cast and the documentary Butterfly: The Steamy Saga of a Cult Classic. Director Matt Cimber, producer Riklis, Zadora and Keach all share their memories of the film, including its inception, the filming on location, its premiere at Cannes and the Golden Globe debacle.

Zadora sings Butterfly’s theme song, the appropriately titled, “It’s Wrong For Me To Love You”. Well, if lovin’ Pia Zadora’s deliciously bad movies is wrong… then I don’t wanna be right.