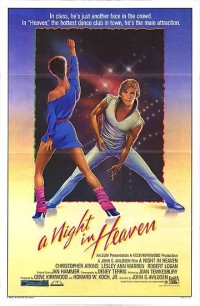 In class, he’s just another face in the crowd. In “Heaven,” the hottest dance club in town, he’s the main attraction.

Hollywood producers have long mined the pop culture zeitgeist in search of the next big blockbuster. Subjects as diverse as western bars (Urban Cowboy, 1980) and aerobics (Perfect, 1985) to the latest dance craze (Lambada and The Forbidden Dance, both from 1990) have all found their way to the local cineplex. In the early 80’s, when the fine art of male burlesque experienced a surge in popularity, it was only a matter of time before the story of a male stripper (and the women who loved him) made it to the big screen. A Night in Heaven (1983) was the first big screen look into the dramatic and tumultuous world of men who take it off for cash.

What it’s all about: As the Bryan Adams song “Heaven” plays over the opening credits, nice guy rocket scientist Whitney Hanlon (Robert Logan) gets on his recumbent bike and rides and rides and rides. He finally arrives home in time to kiss his wife goodbye. Faye Hanlon (Leslie Ann Warren) is a teacher at a Florida community college. With her hair in a bun and wearing an oversized pair of eyeglasses, Warren looks to be the very definition of a conservative school marm. During her speech class, she listens intently as young Rick Monroe (Christopher Atkins) gives a lackluster presentation.

“You say what you say well, but you have nothing to say,” she puzzlingly criticizes. She doesn’t fall for his good looks or fast-talking charm (at least not yet) and gives him a failing grade on his final exam.

That evening, Faye prepares for a night out with her sister Patsy (Deborah Rush) who is visiting from out of town. Once they’re all gussied up, she tells Faye, “You look like a hibiscus in bloom.” It’s meant as a compliment, but Faye looks more like a Ramada Inn cocktail waitress than an exotic flower.

The girls head to a local nightclub, Heaven, where a touring group of male strippers are performing. The women shriek and giggle as a motley crew of guys strip down to their g-strings. As we’re forced to watch them shake what little they’ve got, it’s hard to imagine that anyone, anywhere, at anytime, could have found what they’re doing sexy.

The M.C., who spouts lame double entendres and groan inducing puns, announces that it is time for the main event. From a flurry of bubbles and dry ice fog emerges a man in a silver space suit. When he removes his space helmet, Faye is shocked to find that “Ricky the Rocket” is her handsome speech student Rick.

“I just flunked that kid in my class!” Faye shouts over the loud music.

“You did what to his ass?” a friend comically tries to clarify.

“Give him an A!” Patsy crows as Rick, much to the delight of the female crowd, strips out of his costume.

Faye gets positively googly-eyed after Rick grinds his crotch in her face. They share a deep soulful kiss before he continues his routine and elicits tips from the eager club patrons.

At home in bed, Faye tries to initiate marital relations with her husband, but is rebuffed. As it turns out, nice guy Whitney has just been fired over a matter of principal. He refused to shift his focus to government weapons research.

At a college art show, Rick explains to Faye that he strips to pay for school and hopes to get into hotel management (?!) as a way to care for his hard working mother. The hard luck story doesn’t impress her.

Before Faye can answer she must introduce her husband to the student stripper who has peaked her interest.

Though she’d rather stay at home with Whitney, Faye is lured back out by her sister. At the club, Faye watches as “Mountain Man Dean” works the crowd. When an aggressive bachelorette removes his g-string, she faints at the sight of his “tree trunk”. The moment is played for laughs, but only serves to point out how the story veers from feminism to misogyny without ever making its intentions clear. Are these modern women free spirits who can have their cake and eat it too? Or are they adulterous nincompoops? What exactly is this movie trying to say?

Whitney tries to get a job as a video game developer, but nothing comes of it. In an obvious moment of foreshadowing, it is revealed that Whitney (the pacifist scientist and former Air Force pilot) is a gun enthusiast. Um…okay, sure, why not?

Patsy’s visit is cut short and she must return home. At the airport she reveals that her wild behavior during her time with Faye was a brief attempt to escape her troubled marriage. Faye gives her a pep talk and sends her on her way.

Faye finally beds her collegiate dreamboat in her sister’s vacated motel room. Thunder and rain outside their window sets the mood. Rick puts her hand down his pants before taking her for a ride. Atkins strips naked while Warren remains fully clothed during their love scene.

Patsy calls Whitney to let him know that she make it back to Chicago safe and sound. Since Faye isn’t spending time with her sister, Whitney begins to wonder just who exactly she is spending time with. Faye leaves the hotel room to teach a class. When she returns that evening, she finds Rick in the shower with his white trash girlfriend.

It’s from this point that the movie spirals towards its gonzo climax. In the hotel lobby, nice guy Whitney turns Dirty Harry and kidnaps Rick at gunpoint, “I wanna see you dance.” He takes the kid in a boat and goes out onto the water somewhere. Whitney then makes him strip naked and explain himself. “Where do you get off fucking my wife?”

Looking down the barrel of a gun, Rick blubbers like a baby and whines that, “I though she was lonely.”

Wrong answer. Whitney fires the gun and shoots several holes in the bottom of the boat, leaving Rick to fend for himself.

After each of their escapades, Faye and Whitney sit down together at their kitchen table and, with only a few words between them, all is forgiven. As the camera pulls back and Bryan Adams begins to sing, you may ask yourself, “Is that it?”

The answer is yes.

In conclusion: Directed by John G. Avildsen (Rocky, 1976) and written by Joan Tewkesbury (Nashville, 1976) it would seem that, despite it’s salacious subject matter, an honest attempt was made to make A Night in Heaven a worthwhile drama. The fact that the end result was more salacious than serious probably has something to do with the question that has plagued Hollywood from the very beginning. Are movies art or are they commerce? In this particular case, art may have fallen by the wayside in favor of the film’s more marketable aspects (i.e. Sex).

Though no “making of” featurette is included on the DVD, it’s pretty easy to guess what went on behind the scenes while making this 80’s gem. The script offers a few clues as to what might have been. Along with the main story between the schoolteacher and her student, Tewkesbury introduces several secondary characters whose lives all intersect with one another. These characters were undoubtedly meant to support the main characters and add depth to the story. Unfortunately, they’re never given the chance to do so.

As one of the characters who have no real effect on anything, Deney Terrio (also the film’s choreographer) plays one of Rick’s friends who loses his janitorial job at NASA. By the film’s end he turns to stripping for cash. His comical dancing debut is oddly intercut with Whitney and Rick’s naked moonlit boat ride. When Rick’s sister is introduced into the story, she moves away moments later to be with her jailbird boyfriend. At one point Whitney even flirts with a former female co-worker but nothing ever comes of this plot point either.

Though there is no definitive source that says so, it feels as if the plot was slowly whittled down until only the most marketable aspects of the story (the stripping and the sex) were left. Considering that the movie clocks in at a meager 83 minutes, this is the most likely scenario.

A Night in Heaven is filled with the sights, sounds and attitudes of the Regan era. For some, this cheesy cinematic artifact may be a welcome walk down memory lane. For others, it may represent a bygone era that is best forgotten.

Though, the sight of Christopher Atkins bumping and grinding in a silver lamé space suit qualifies a truly unforgetable. 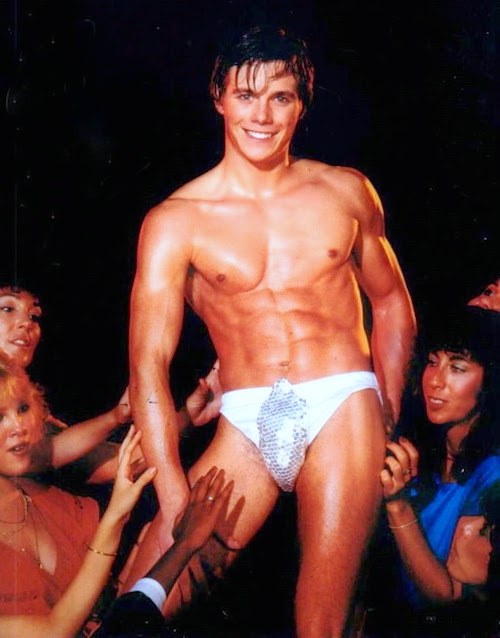