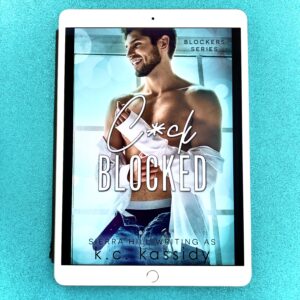 Niall and his sister Nan run their family farm and small B&B which sits nestled in the Irish countryside. An American has booked a stay for an entire month and Nan has offer up Niall to play tour guide for their guest.

That guest is Grayson, the successful (but closeted) star of a popular TV historical drama who is very much looking forward to some downtime between seasons so he can finish the script he’s working on.

While out for a walk, Grayson comes across a small cottage. When he hears a commotion inside, he helps Seamus, Niall’s dad, who’s taken a wee bit of a tumble. He’s fine and they end up having some tea, giving Seamus time to assess their lodger who, “better not be giving his son the business and then leaving him high and dry.”

Grayson can’t help but playfully flirt with Niall, his big, strapping, attractive guide as they tour the rugged Irish countryside. While on the hike Grayson is recognized by a tourist. The jig is up. Until this point, he’d been traveling incognito. After taking a selfie with her, he explains to Niall that he didn’t lie to him (not exactly), he just needed a little anonymity while on vacation.

They row across a lake to a small island and explore the ruins of McDermott castle. It’s there that their casual flirtation leads to a memorably scorching kiss. They both want this, but Niall isn’t particularly interested in just a fling with a guy on the down low, no matter how gorgeous that guy might be.

But some urges can’t be ignored, and they eventually end up in bed together. The sex is so robustly satisfying that they end up breaking the headboard. The next morning, Seamus can tell what’s up – the lovebirds aren’t fooling anyone. When Nan returns to the farm after a quick vacation with her husband and kids, she literally faints at the sight of her favorite actor. After being revived, she gives her brother a hard time because she too can see what’s going on.

While falling for Niall, Grayson has been busy with his screenplay (a project close to his heart) and coming up with a game plan about coming out publicly. There may be a light at the end of tunnel after all.

After spending another satisfying night in each other’s arms, Grayson realizes that he can never go back to who he was before and that there is truly no other place he’d rather be than with Niall.

But Grayson’s secret gets out. Paparazzi photos of their amorous escapade in the barn are published. Grayson is gone the next morning, a note explaining that he loves Niall, but his fame will destroy the beautiful quiet life he’s built on the farm.

After landing at Heathrow, Gray gets a text from Niall. There’s been a death in the family and that, combined with losing Grayson is too much to bear. Please come back.

But before Gray can book a return ticket, Niall shows up in London and, in the hotel lobby, they reunite with a kiss for all the world (and paparazzi) to see. No more hiding. Their love will be on their terms from now on.

An epilogue shows our two heroes fooling around in the back of the limo on their way to the premiere of the movie Grayson wrote, produced, and directed. The two of them have truly written their own perfect happily ever after.

Okay, real talk here, I loved these two characters so much. Not only is their romance steamy and adorable, but the playfully snarky back and forth way they flirt with and tease each other… heaven. Grayson and Niall can banter with the best of them, and I loved every second of it.

Something I also unexpectedly enjoyed about this story was the fictional way the reader (meaning myself) was able to escape to someplace wonderful and new. I haven’t gone anywhere or done anything for nearly two years and this story offered a delightful getaway that I didn’t realize I sorely needed. Who wouldn’t love to visit Niall’s farm/B&B, tour the rugged landscape, and see the beautiful sights of Ireland? It was like a vacation by proxy. Sublime.

Author Sierra Hill, here writing under her new m/m romance pen name KC Kassidy, has crafted a wonderful story that’ll sweep you away with its irresistible locale and memorable characters.

As a quick aside, this book is a prime candidate for audio. Seriously, it’s a no brainer. Can you imagine the Irish accents? To die for.

Sign me up. I’d listen to Cock Blocked on audio in a heartbeat. Let’s hope that happens soon.