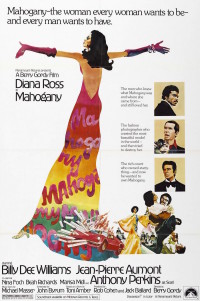 Movies that prominently feature fashion as part of their plotlines are prime candidates for Cool Cinema Trash status. The Diana Ross melodrama Mahogany (1975) is a perfect example. It’s the rags to riches tale of a girl who works her way out of the ghetto and into the spotlight as a famous international fashion model and designer.

What it’s all about: During the “Kabuki Finale” of a chic European fashion show, insane kimono inspired gowns (with glowing trim) are paraded in front of an appreciative audience. Ross makes her dramatic entrance and takes center stage where she is surrounded by the wacky creations that she designed. After soaking up the adulation of the crowd, she returns backstage. Though the show is an unqualified success (go figure) she yearns for simpler times.

In flashback, the camera sweeps past dreary student sketches in a fashion design class. But plucky young dreamer Tracy Chambers (Miss Ross) thinks outside the box. When the instructor gives the assignment for next week, she warns Tracy, “No sequins, no rhinestones and no ostrich feathers.”

If you couldn’t already hum the melancholy theme from Mahogany, don’t worry, you’ll soon be able to. The Oscar-nominated hit song “Do You Know Where You’re Going To?” plays as the opening credits roll. It’s just one of the many times the song in used in the film.

Tracy proves to be streetwise as well. When she’s threatened by a dangerous looking thug one evening, she scares him off by pretending to be a fast-talking ‘ho. Outside her Chicago tenement building, she finds hopeful politician Brian Walker (Billy Dee Williams) loudly preaching social responsibility. When she spots Brian the next day, she plays a practical joke on him by pouring milk into his bullhorn. Assuming that some construction workers are to blame, Brian begins to knock some heads.

Tracy writes a bum check to spring Brian from jail. “I’m the one that turned that trumpet of yours into a horn of plenty,” she explains, “I felt guilty that’s all.”

“Why don’t I come by tonight,” Brian suggests, “and see if we can come up with something we can feel guilty about together?”

Despite this lame come-on, Brian continues to lay on the charm (this is Billy Dee Williams after all) and they get to know one another over a game of air hockey. As they take a walking tour of the ghetto, Tracy justifies her need to get out, “I can see there’s a much better life than this.”

Brian earnestly explains that, “Somebody’s got to stay and do the marching and the politicking and make this a better place to live.”

“That’s me.” What woman could resist a man that noble?

At the posh department store where Tracy works as a secretary, hot shot photographer Sean McAvoy (a hammy Anthony Perkins) mistakes her for a model. “Making like a clothes hanger seems like a silly way to earn a living,” she tells him. But he believes that Tracy has what it takes. He snaps pictures of her as she dances among nude mannequins in a rainbow hued gown of her own creation. Later, she assists Sean as he shoots a fashion layout with the Chicago slums as his backdrop. Brian visits Tracy on the set and condemns the fashion biz as exploitative and pointless.

Tracy is turned down repeatedly when she tries to sell her designs to several windy city manufacturers. With so much of her time spent on her high-fashion dreams, she is fired from her department store job. While on line at the unemployment office, she runs into Brian, who is eliciting votes from the disenfranchised.

In a memorably corny exchange, Tracy harasses him. “I’m a widow from the South side,” she shouts. “My old man left me with six kids and all the kids got the flu. What’re ya gonna do about that?” Though he tries to charm his way through it all with inspiring political sound bites, she continues to bust his chops, “Help me get my old man back!”

Back at her apartment, Tracy sings an impromptu campaign jingle and suggests that he needs more “pizzazz”. As their relationship develops, she begins to spend more and more time on his campaign. “Flash that grand piano of yours you call a smile,” she tells him. Brian rather cruelly begins to take her support for granted. When Tracy receives a phone call from Sean, she is on the first flight to Rome.

Cue that theme song. The montage of Tracy’s Italian cab ride features every possible statue, fountain and tourist attraction in Rome. At Sean’s apartment, Tracy examines the eerie shrines erected in honor of his past supermodel discoveries. “I give all my creations the names of inanimate objects,” Norman Bates, um…Sean explains. “There’s only one word that describes rich, dark, beautiful and rare. I’m gonna call you … Mahogany.”

Tracy, now christened with her supermodel moniker, must strut her stuff in front of the representatives of the Gavina modeling agency. When they make disparaging remarks about her lack of cleavage, she tells them where to get off, “They want a dummy, or better yet, a couple of basketballs and a smile.” Carlotta Gavina (Marisa Mell) admires her spunk and hires her on the spot. Tracy has made it to the big time. Despite the fact that less than ten minutes of screen time have passed since the last montage, she is transformed into Mahogany in another visual medley. As the theme song plays, Ross prances about in more memorably atrocious fashions.

After Sean makes a pathetic attempt to seduce her, their personal and professional relationship takes a turn for the worse. While filming a commercial, Mahogany petulantly decides to wear one of her own ridiculous designs instead of the approved wardrobe. Sean tries to rip it off her…and who could blame him?

At a charity fashion auction, Mahogany wears an orange beaded kimono of her own creation. When no one bids on the dress, Sean demeans her by placing an insulting bid of 500 lire. Laughed at by the glitterati, Mahogany is about to make her humiliated exit when Christian Rosetti (Jean-Pierre Aumont) comes to her rescue. “Twenty million lire!” he shouts.

Afterward she tells Christian that, “I’ve waited a long time for this night. This is my first sale. You can have whatever you want.” Sean interrupts them and tries to make amends with his supermodel meal ticket. When Brain shows up in Rome she gives him a glimpse of her glamorous life. “It’s a whole new thing here,” she tells him.

Gigantic portraits are projected on the walls at a party thrown in Mahogany’s honor. Brian unwisely agrees to look at Sean’s gun collection. Sean continues his downward spiral into Psycho territory when he holds Brian at gunpoint. They wrestle each other to the ground. When Brian gains the upper hand, he pulls the trigger, but the chamber is empty. “What are you trying to do?” a googly-eyed and crazed Sean asks, “Kill me?”

After anointing herself with candle wax, Mahogany wonders why Brian can’t seem to get with it. She shifts into ultra diva mode when she shouts, “I’m a success and you can’t stand it. Me… Mahogany.” She calls him a loser and pours champagne on his head.

Before walking out the door, Williams delivers the movies cornball tagline, “Success is nothing without someone you love to share it with.”

As the orchestra swells on the soundtrack (one guess which song is played) Ross goes apoplectic and screams. “I hate you! I HATE YOU!”

In the middle of another commercial shoot with Mahogany, Sean gets into the drivers seat of a sport car and completely flips out. Speeding down the highway, they wrestle for control of the car. As they swerve across the asphalt, Sean snaps pictures of the petrified supermodel. Ross and Perkins continue to battle hilariously until the road ends and they crash into a construction site. While recovering at Christian Rosetti’s estate, Mahogany looks at the photos of Sean’s death drive. “He wanted to see death and that’s what he saw.”

As soon as she’s fully recovered, Miss Ross is back to her old ways and is screaming at the seamstresses in the couture workshop that Christian has purchased for her. At the showing of her premier collection, it appears that Tracy has achieved everything that she’s ever dreamed of. As the crowd cheers, Brian’s parting words ring in her ears. Could he have been right? At what price has she achieved her success?

Back at the villa, Christian intends to collect on his investment. When it becomes apparent that Tracy has no love for him, he asks, “Where do you want to go from here?”

Under a bleak and dreary Chicago sky, Congressional hopeful Brian delivers a speech to boisterous listeners. Suddenly, a female voice rings out from the crowd, “I’m a widow from the south side!” Resplendent in a white fur coat, Tracy steps forward and taunts Brian with the same recitation from the unemployment office. “I want you to get me my old man back!”

“Are you prepared to stand by him when the going’s gettin’ rough?” he asks. “Madame, would you be willing to put your imagination to work on behalf of the cause he’s fighting for? Madame, would you love and cherish him for the rest of your life?” As if bearing witness, Tracy eagerly answers yes to all of his conditions. “If you’re willing to do all that…I guarantee you, I’ll get you your old man back.”

“Then mister,” she coos, “you got my vote.” After their hopelessly hokey declarations of devotion, Brian and Tracy seal their reunion with a kiss. The crowd cheers as that song plays one last time.

In conclusion: When Mahogany was released during the height of the feminist movement in the 1970’s, the ending ruffled a few feathers. Many labeled it sexist. Mahogany, despite its contemporary urban settings, is in essence an old fashioned women’s picture. It’s the same kind of shop girl romance that Joan Crawford popularized in the 30’s and 40’s. The ending simply remained true to the story’s melodramatic roots.

Though the end seems to suggest that Tracy has sacrificed her dreams to be with her man, who’s to say that she became a mousy housewife after returning to Chicago? If Brian achieved his congressional aspirations, she could have become a powerful and influential politician’s wife. Even though her success in Europe wasn’t all it was cracked up to be, why couldn’t she create a new business stateside? Americans love crazy fashion too. So, is it sexist? It’s all in how you look at it.

Motown maestro Berry Gordy received final credit (after Tony Richardson was fired) for directing this fashionable camp classic. Gordy’s only other foray into filmmaking was as producer of The Last Dragon (1985). When Mahogany failed at the box office, Ross’ film career suffered. After starting off promisingly with Lady Sings the Blues (1972), it only took the urban musical flop The Wiz (1978) to end her big screen career.

In an online review of Mahogany, an IMDB user says that this was the film that inspired him to become a fashion designer and a drag queen! Truly, what higher praise could there possibly be? It just goes to show… bad movies do, in fact, have the power to change lives.