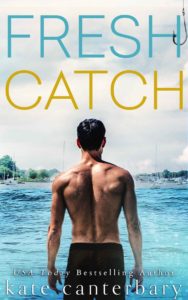 Fresh Catch is essentially a secret prince story, though instead of a hunky royal or bad-boy celebrity on the down-low – in this story we have a tech gazillionaire.

Cole is a Silicon Valley wunderkind who’s been forced to take a leave of absence/vacation by his new board of directors.

He’s sailing up the eastern seaboard on his fancy sailboat, when the navigation system goes on the fritz. He floats into the cove of gruff Maine lobsterman Owen.

Things don’t exactly get off on the right foot for these two but, despite the fact that they’re from two different worlds, they begin to warm up to one another (it doesn’t hurt that they each find the other wildly attractive).

While Cole is waiting for his boat to be repaired, he’ll stay in the spare room of Owen’s seaside cottage and, since Owen is short a deckhand, they’ll work together each day pulling in lobster traps.

As they spend more time getting to know one another, the sexual tension builds until they each take matters into their own hands (so to speak) leading to a scorching sex scene where, in seperae rooms with the cottage wall between them, they verbally express their need for each other.

As the days and weeks pass, they continue their sexy summer fling, Owen becoming adorably possessive of his new lover, and Cole reveling in the simple life of a quaint coastal town.

This may have been my favorite part of the book, where the main characters – two genuinely nice guys – go on dates and get to know one another. It sounds deadly dull as I’m explaining it here, but I think it’s a crucial step that a lot of authors miss. As the characters take the time to fall in love, we fall for them and become much more emotionally invested in their happy ending.

They’re both in love, and Owen is about to ask Cole to stay with him permanently, when he sees a magazine expose in the checkout lane of the supermarket. Cole’s not just a tech guy from California. He’s a mogul who practically invented the internet. The confrontation between our lovebirds doesn’t go well. The ensuing black moment is pretty textbook –

“Why didn’t you tell me the truth?”

“I tried, but you weren’t interested in the truth.”

That kind of thing.

Stuff we’ve seen a million times before, but because the author Kate Canterbary has done her job and laid the emotional groundwork, we implicitly understand how devastating and painful this moment is for our heroes… and, frankly, a punch in the gut for readers (like myself).

Thankfully, Cole quickly figures out how he can still manage his business empire and live with the man he’s come to love. Crisis successfully averted.

There’s an adorably sweet epilog (that I particularly enjoyed) showing how Owen and Cole have made things work out, it may have involved baking and a precocious puppy.

This review originally appeared in episode 177 of the Big Gay Fiction Podcast.