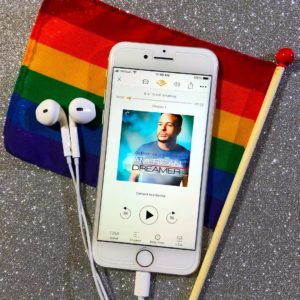 This book could’ve easily been titled ‘The Food Truck Chef and the Librarian’, if that doesn’t automatically make you want to one-click this book, then you might as well keep on moving – because nothing I’m about to say is going to convince you to try this phenomenal romance.

Nesto is the food truck owner — who has relocated his business from NYC to upstate NY. He pours every ounce of his passion into the Afro-Caribbean food he serves, until that is, certain other passions are stirred by Jude, the librarian of the story.

Their attraction is instant, and their chemistry is obvious to everyone around them.  But our heroes take things relatively slow, despite well- meaning nudging from friends and family.

You see, not only are they passionate about one another, Nesto is determined to make his business a success, and Jude is focused on getting funding for a county-wide bookmobile project.

They have lives beyond the romantic story arc of the book.

Hoity-toity literary snobs would call Nesto and Jude “dimensional characters” because they have depth. All I know is that I care about them because they are real to me, in my heart and in my mind. It’s something that goes beyond words on a page.

Several times throughout the story, life throws various obstacles in their path, but every time they rise to the occasion.

It would take a scene-by-scene breakdown of the entire story for me to explain how much I loved Nesto and Jude – and how they, through their actions, overcome their obstacles (both romantic and business related).

It’s one thing for an author to tell us a character is romantic or heroic — it’s another thing entirely when we’re shown that romance, that heroism, in the action that occurs in the story.

Nesto and Jude are good men. We know this because we experience it time and again in the book and we root for them because of it.

A member of Jude’s estranged family is gravely ill and reaches out to him. Jude gives this person a second chance (though they soooo don’t deserve it) and he is inevitably let down by them.

Jude is emotionally devastated by this and Nesto is not there for him, even though he promised he would be.

Up until this point I felt Nesto was the living embodiment of the perfect boyfriend, but when he badly screws things up – not maliciously or on purpose – he screws up because he’s human, which made me love him even more (as if that were even possible).

But Nesto isn’t going to give up without a fight, and comes up with a swoon-worthy grand gesture to win back Jude.  It’s a really fucking good one, by the way, and our heroes achieve their final (and very well deserved) happily ever after.

I want to recommend episode 341 of Smart Podcast Trashy Books. Sarah Wendell has a terrific interview with author Adriana Herrera and they talk about all sorts of things including the food featured in the book, writing diverse characters, and how her job as a social worker influences the way she looks at romance in the books she reads and writes. It’s really fascinating stuff and I suggest everyone check it out.

I also want to quickly recommend the audiobook of American Dreamer as read by Sean Crisden. He’s one of my absolute favorite narrators and he does an exceptional job with this book, especially the various dialects of the ethnically diverse cast of characters.

If you want to read a kick-ass debut novel, get this book.

If you crave genuine diversity in romance, get this book.

If you want likeable, relatable heroes to fall in love with, get this book.

This review originally appeared in episode 179 of the Big Gay Fiction Podcast.