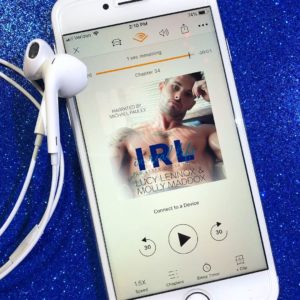 IRL: In Real Life (After Oscar book 1) by Lucy Lennox and Molly Maddox

In Real Life combines the classic alpha billionaire character trope with the time-honored scenario of two characters who are combative in real life, but are secretly corresponding with one another and falling in love.

Which is the long-winded way of saying it’s a similar set up as the classic movies Shop Around the Corner, You’ve Got Mail, In the Good Old Summertime, and the musical She Loves Me. The way that the characters write to each other has changed and evolved, but the premise remains the same. There’s also hints of enemies to lovers and opposites attract. This book is ripe with tropey goodness.

Nice guy geek Conor is in New York to sell his mother’s bio-med technology to a ruthless CEO. The evening before his big presentation he decides to live a little and begins sexting with who he thinks is the sexy hotel bartender. It’s not.

The text exchange he ends up having with a stranger, who he calls Trace, is amazing, and through several flirtatious and super-hot online conversations, they begin a fling.

His first inclination is to use this information as leverage in their business negotiations. But Wells quickly begins to fall for Conor, both the sexy online version and the awkward real-life version.

As they work through the contracts for the sale, Wells continues his deception. They spend several days together and get to know one another, Conor unaware that Wells and Trace are the same person.

We follow our heroes, almost in real time, as they fall in love while working together, going out to dinner, and taking carriage rides in Central Park.

Once the business deal is finalized, Wells and Conor finally give in to their attraction and sleep with each other. Needless to say, it’s amazing and life altering for both of them.

But, as is the case in stories like these, Conor finally puts two and two together before Wells can come clean about his sexting alter ego.

Conor is humiliated and justifiably furious. He packs his bags and returns to North Carolina, with zero intention of ever speaking to Wells again.

I’m going to be super upfront with you guys, there are certain aspects of the billionaire trope that I personally find problematic. I was on board with Wells and Conor for most of the story, but there were moments when I had a hard time dealing with certain aspects Wells’ alphahole personality.

In my view, if the ending of this book was going to be believable, Wells was going to have to move mountains and pull off one of the biggest mea culpas in romance history.

It may not have been the biggest, but Lucy Lennox and Molly Maddox crafted a finale that was truly heartfelt and genuinely appropriate for our two heroes.

To make amends, Wells makes sure Conor’s sick mom is well taken care of and part of an experimental treatment program (her illness was the reason they needed the money from the business deal).

Later, when Conor is unable to attend a big comic convention to unveil an important new development in his gaming business, Wells steps in, and personally gives a rousing presentation on Conor’s behalf.

Wells proves he isn’t the billionaire alphahole he seems.Yea for true love and happily-ever-afters!