Quick Review: Under His Protection by LaQuette 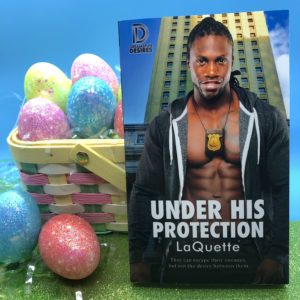 Under His Protection by LaQuette

This book literally starts with a bang when one of our main characters, assistant DA Camden, is nearly blown up by a car bomb. In order to keep him safe, he’s put in protective police custody.

Unfortunately, the man watching over Cam is the memorable one night stand he walked away from five years ago, a guy named Elisha. Sequestered away in Elisha’s Westchester house, our two heroes must come to grips with the attraction that still, after all this time, is still there.

As things start to become more romantic, the situation becomes even more complicated when Elisha’s family shows up for a weekend visit. They assume that the two of them are a couple and Cam and Elijah play along since it’s too dangerous to explain why Cam is hiding out at Elijah’s house.

Over the course of the weekend Cam can’t help but fall for Elisha and his wonderfully crazy family.

You might think things get a little too close for comfort with our two heroes and the family all in one house. Elisha has a very small apartment in his attached garage. They escape there every once in a while for some truly superduper scorching sex. The chemistry between these characters is very real and very palatable.

As the weekend winds down, there’s an unfortunate kidnapping attempt by a crazy religious group and Cam sacrifices himself in order to save Elisha’s mom.

Camden ends up in hospital and, unfortunately, his father arrives on the scene. Camden’s life has essentially been controlled by his father, who’s had his sons life planned out from my birth to death. It’s essentially how Cam has lived his entire life.

The expectations of his father are part of the reason why he walked away from Elisha five years ago. Having a sexy one night fling, and living a life with an average guy like Elisha just wasn’t in the plan.

After experiencing the possibility of loving a man like Elisha and realizing the wonderful possibilities of a fun and fulfilling family life, he tries to stand up to his father.

Cam’s father puts a stop to everything, setting up some genuinely insurmountable roadblocks to our heroes and their happiness.

With the help of Elisha’s police chief friend, Cam concocts a way to outwit his father and get out from under his thumb, so that he Elisha can live happily ever after.

I don’t know if I can adequately find the correct words, or enough adjectives to tell you how much I loved Cam and Elisha’s story. It’s  just really damn good. One of my favorites of 2019 so far!

I hope it’s obvious that I really enjoyed Under His Protection by LaQuette and I highly recommend that everyone give it a read.

This review originally appeared as part of episode 184 of the Big Gay Fiction Podcast.