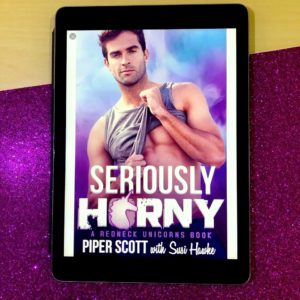 He runs into the kid’s college age brother, Eric, an irresistible dragon omega. They go to search together for Eric’s brother. One night, in a motel room they give in to their desire, and trust me, the scene lives up to the book’s title.

Eric has the power of second sight, kind of like Faye Dunaway in Eyes of Laura Mars, and he ‘sees’ where his brother lays injured. Isaiah and Eric find him and bring him back to the dragon compound where he can heal from his injuries.

Eric is with child after his night with Isaiah, and months later we find our heroes happily in love with the beginnings of a new family. 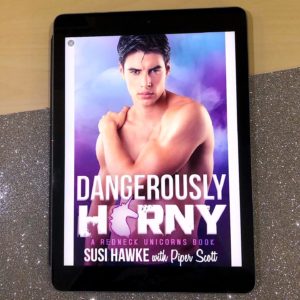 The rejection hits Bo Luke hard and he runs off, straight into the clutches of a crazed woman who has uncovered the secret of the unicorn clan, and desperately wants to touch Bo Luke’s horn – and yes, that euphemism means exactly what you think it means.

Mitch and some of his dragon buddies are sent to find Bo Luke. They rescue him and subdue his kidnapper.

Because this is a paranormal shifter Mpreg romance, omega Bo Luke finds himself in an uncomfortable situation, and alpha Mitch is the only one who can scratch his particular itch.

They fuck and it’s hot and amazing and (of course) totally magical. Mitch’s misgivings were unfounded, they are now fated mates.

While waiting for their child to be born, Bo Luke’s stalker escapes custody and attempts to kidnap her unicorn obsession once more. In an action sequence that I thought was particularly bad-ass, Mitch and the entire dragon clan literally reign down fire upon her, rescuing Bo Luke once again.

The story wraps up with a hilarious scene in which our heroes experience a very memorable wedding/birthday.

The covers of these books tell you everything you need to know. The hot cover models clue you in to the sexy times ahead, while the titles, which are decidedly camp, tell you that these romances are also about the humor – humor with heart.

I loved both of these stories and think they’re a fantastic way to kick of the new series.

While ‘Redneck Unicorns’ is a continuation of the author’s previous dragon series, they stand alone just fine.

This review originally appeared as part of episode 192 of the Big Gay Fiction Podcast.