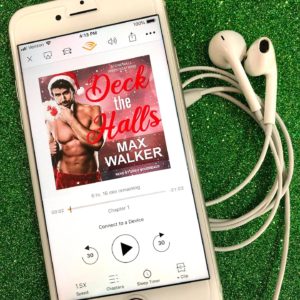 Deck the Halls by Max Walker

Let’s get to the story.

Sassy, nice guy Andrew is the office manager at Stonewall Investigations in NYC. When his marriage implodes, the only thing he has to look forward to this holiday season are divorce proceedings.

When Declan Covington walks into the office, it’s lust at first sight. After some flirting, Declan proposes Andrew accompany him on holiday.

Declan will be the only member of his family without a significant other in attendance at the yearly Christmas gathering. If Andrew agrees to play his boyfriend for the week, it’ll take some family pressure off him and will give Declan the chance to cheer up the irresistible Andrew.

‘Fake Boyfriends’ for the win!

Declan and Andrew have a private guest house all to themselves and it’s not long before they realize that they’ll want this ‘fake’ relationship to be consummated underneath the mistletoe.

Andrew is a hit with most of Declan’s family, with the exception of his step-father and snobby step-siblings.

After all, there must have been a reason for Declan to show up at Stonewall Investigations in the first place, right?

Declan’s mother has been ‘misplacing’ expensive pieces of jewelry and no one has been able to explain the mysterious disappearances. Declan has his suspicions about the thefts, but it’s Andrew, using his deductive instincts (and some tricks he’s picked up while working at Stonewall) who finally cracks the case.

Our heroes solve the crime, get their HEA, and start a new life in Miami, where Andrew manages the new branch office of Stonewall Investigations.

I loves this story so much and this couple so very much, that I struggle to come up with anything else to say. It’s obvious from the beginning that Andrew and Declan are going to be great together, they have that intangible ‘it’ factor, that undeniable chemistry on the page.

Max Walker should be commended. Creating characters that are engaging and leap off the page is not something that every author can do.

There’s heat and sexual tension from the first moment out heroes meet, but even after they’ve had sex, there’s still that chemistry and humor and that undeniable feeling the reader gets that these two people are supposed to be together… that they’re meant to be together.

I loved Andrew and Deck’s story. It’s a wonderful worthwhile read, no matter the time of year.