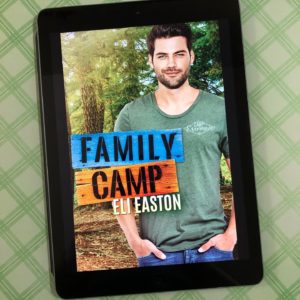 Nice guy schoolteacher Geo is a brand-new foster dad to 5-year-old Lucy and surly pre-teen Jayden. A week at family camp should be the perfect bonding experience for all of them, but things get off to a rocky start when Geo’s car runs out of gas on the drive up to Big Bear. A breathtakingly handsome good-Samaritan helps them out, and they’re soon back on the road.

Pro baseball player Travis loves returning each summer to the camp that his family runs. It’s home to him. Helping an attractive, but clueless dad and his kids on his drive in wasn’t any trouble, but an off-hand comment gives Travis the impression that Geo has no interest in providing a forever home for his foster kids.

Travis was adopted. Maybe Geo isn’t so cute after all.

When Geo shows up at Camp Evermore, Travis tries his best to avoid him, which proves difficult since Travis’ job is to make sure that the campers, allof them, have the best possible time.

After sharing a series of outdoor activities (canoeing, hiking, sing-a-longs) Travis is drawn to Geo, Lucy and Jayden. They might be a new family, but Travis can see that they’ve got something special. After spending more time together, Travis and Geo iron out their misunderstanding – Geo is, in fact, doing everything in his power to adopt Lucy and Jayden.

The kids start to come out of their shells, making friends and bonding with Geo. Even some dramatic moments (because what’s family life without a series of unexpected disasters?) can’t deter this newly formed family.

Some of the camp moms point out that the flirtatious attraction between Geo and Travis hasn’t been particularly subtle. Their quiet moments shared after lights out and stolen kisses in the woods just aren’t enough. At the parents-only party on the last night of camp, Travis takes Geo back to his room at the main house and they spend an amazing night together. They want to make things work despite the obstacles facing them.

Travis receives word that a tabloid site has published a picture of him kissing Geo and he immediately leaves for L.A.

On the final morning of camp, Geo is disappointed and a little broken-hearted that Travis didn’t even say good-bye. He also must console his kids, because if there was anyone who loved Travis more than Geo, it would be Lucy and Jayden.

Travis is given the choice of denying the picture or telling the truth. He does what no other pro baseball player has ever done – he comes out of the closet.

Once the details of his career are ironed-out, Travis has Geo, Lucy and Jayden come to one of his games. After Geo wraps his head around being the boyfriend of a famous athlete, they all live happily ever after – as a family.

I’m so glad that I read ‘Family Camp’. It was the perfect end of summer read.

I loved Geo and Travis so very much. Two terrific characters who over the course of the story open their hearts, learn to trust and create a family that was perfect for them.

I really loved all the secondary characters as well, they provided a great support system for our heroes on their journey towards love.

Speaking of journeys, though the bulk of the story takes place over the course of just seven days, I didn’t feel like the romance felt rushed or unrealistically insta-love-ish. I think the author made the most of the interactions the characters had, building the foundation of their feelings one camp activity at a time.

This review originally appeared in episode 204 of the BigGayFictionPodcast.