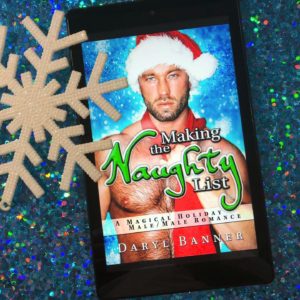 Nice guy Daniel is making his way home to spend time with his family over the holidays, a prospect he’s not looking forward to. When his car gets a flat tire, he is effectively stranded in the middle of nowhere because he has no idea how to change said flat.

A sinfully sexy biker named Cass comes to his rescue and, as he puts on Daniel’s spare, they chat about a lot of things including what would Daniel do if he had three Christmas wishes.

The tire now fixed, Daniel continues his journey. With hopes that things might go better this year, Daniel arrives and finds that his family is as loud and overbearing as ever, steaming rolling over anything he says or does, his thoughts and feelings irrelevant.

Daniel is reticent at first, but after an amazing blow-job from Cass, he decides that the whole fake boyfriend thing might not be so bad after all. Cass is a hit with everyone, and Daniel’s Christmas is shaping up to be pretty spectacular, especially when they must share the tight quarters of Daniel’s childhood bedroom. Let’s just say that blow-jobs aren’t the only thing Cass knows how to do really well.

When asked who he really is, Cass admits to being a wintertime spirit sent from the North Pole to make all of Daniel’s holiday dreams come true. Daniel thinks Cass is being funny… he is joking right?

When the sun rises on the day of Christmas eve, the Texas landscape outside Daniel’s window is covered with freshly fallen snow. A white Christmas, Daniel’s second wish.

After a day in the snow, the Christmas magic seems to have affected everyone, the usual family squabbles at a blissful lull. Later that night, Daniel and Cass sneak out to go to a neighborhood playground that used to be decorated for the holidays. They arrive to find it bare, but in Cass’ presence, the playground is soon aglow with holiday magic. They go home and bake cookies for Santa before Daniel decides on his final wish – Cass, not just for a weekend, but for always.

When Daniel awakens on Christmas morning, Cass is gone, and Daniel’s family don’t remember any of the events of the past few days. It seems that holiday magic has a sell-by date, though the spirit of the season does allow Daniel to honestly mend fences with his family members.

On his drive home Daniel gets another flat tire or, since the events of the last couple of days have ceased to exist, he gets a flat tire for the first time. Stranded, Daniel is delighted to hear the familiar roar of a motorcycle engine.

The man of his dreams has come to his rescue for the second (or first) time. They introduce themselves and Daniel suggests they leave his old beater on the side of the road and grab dinner together.

They roar off into the sunset together.

Now, I’ve given you an awful lot of detail about this story and you might think I’ve spoiled everything about the ending, but ah-ha, I haven’t!

There is an AMAZING epilog that shows our heroes several years in the future, detailing the love and life that they now share. I just have to say that it is pure romance crack. It’s sweet and sappy and made me sooo fucking happy that I know that when you read it, you’ll go “aww” just like I did.

If you can’t already tell, I really enjoyed Making the Naughty List. This is my first Daryl Banner book and it won’t be my last. I totally fell in love with the heroes and sympathized a lot with Daniel and his dilemma in dealing with his difficult family, who to the authors credit, weren’t cardboard villains, but real characters with complicated family dynamics. It made Daniel’s resolution with his sister, brother, and mom that much more powerful because they were fully fleshed out people.

With a sexy dash of magical realism, Making the Naughty List is a must read for fans of holiday romance. Yes, I know that sounds like a cheesy promo blurb, but I’ don’t care because it’s 100% true.

This review originally appeared on the Big Gay Fiction Podcast.